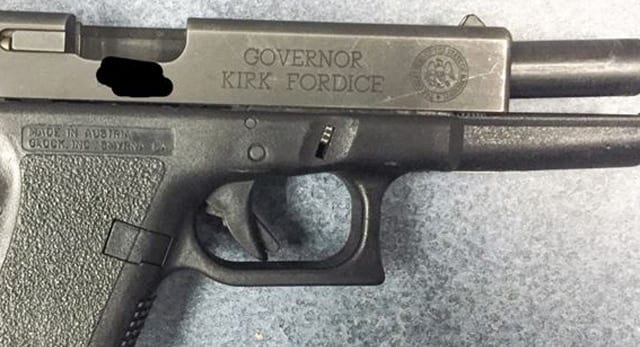 An investigation is currently underway to provide pertinent information regarding the validity and rightful owner of this Glock pistol recovered during the search warrant.

A handgun belonging to former Mississippi Gov. Kirk Fordice was picked up by police when a SWAT team raided a suspected drug trafficker’s house Friday.

Although police are still investigating the Glock’s rightful owner, family members told local media that the gun, which has the governor’s title and name engraved on the slide, was stolen from Fordice’s son’s pickup in 2012.

Police in Jackson, Mississippi, recovered the gun after executing a search warrant. They arrested Delvin Lackey, 39, and charged him with possession of marijuana with intent to distribute, possession of a firearm by a felon, and possession of a stolen firearm.