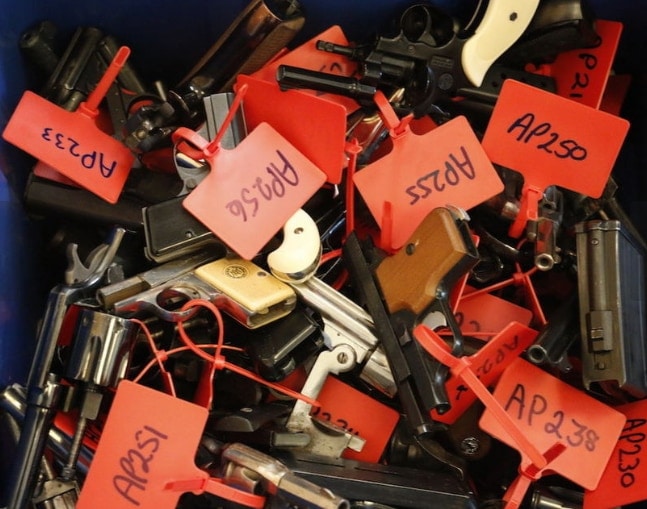 No second chance for these firearms, which – unless they were stolen – will all be melted down and destroyed. (Photo: Samantha Karas/NJ.com)

A two-day gun buyback event in Monmouth County, New Jersey, over the weekend brought in more than 360 firearms in two days, breaking last year’s record several hours before the buyback ended. Among the surrendered wares were an Uzi, a replica AK-47 and a .22-caliber Calico M-100 with a 100-round magazine.

According to NJ.com, the buyback was held Friday and Saturday at the county prosecutor’s office in Asbury Park and a fire station in Keansburg. All exchanges were completely anonymous, no questions asked, and participants received $25 for shotguns and rifles, $100 for handguns and $200 for assault-style weapons. All payments were in cash, which totaled more than $25,000 and came from an anonymous donor and county forfeiture funds.

Although they could still be turned in, no compensation was provided for BB guns and non-working firearms, and ammunition and magazines were also accepted.

Charles Webster, spokesman for the Monmouth County Prosecutor’s Office, said they have been doing buybacks for 25 years and have always gotten a good response, but they are especially happy with this year’s turnout.

Webster said the process for turning in unwanted weapons is simple.

“You show up, you hand us a weapon, we give you cash, you walk out the door,” he said. “How much easier could you make it?” 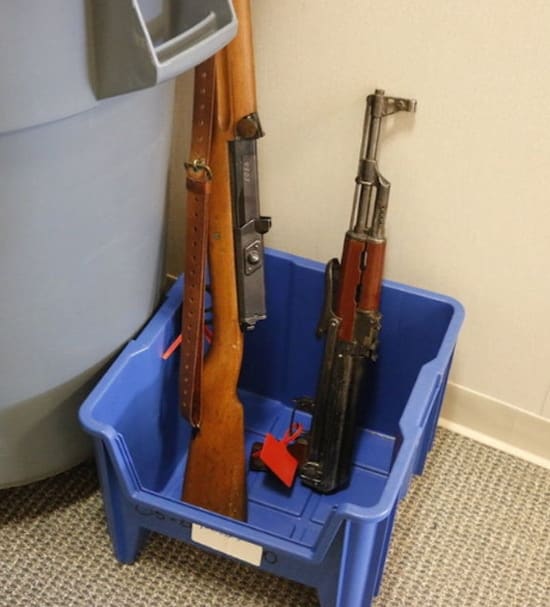 Once a firearm is surrendered, authorities check the serial number to determine if it’s stolen. If it is, the gun is returned to the rightful owner, but if not, the weapon is melted down and destroyed. Webster said they make no exceptions, not even for unique, antique or otherwise collectable firearms.

Webster did not elaborate on the recycling process or where it occurred, but did say one facility melts the metal down and makes it into rebar.

Webster said it’s important for them to collect unwanted guns and that not all gun owners are responsible, sometimes storing firearms improperly and increasing the likelihood of the them being stolen and therefore ending up on the streets.

“And that’s what ends up killing people and cops,” he said.

In addition to the 9mm Uzi, Calico M-100 and AK-47 replica, authorities filled buckets with hundreds of revolvers and pistols, while trash cans were occupied with shotguns and rifles.