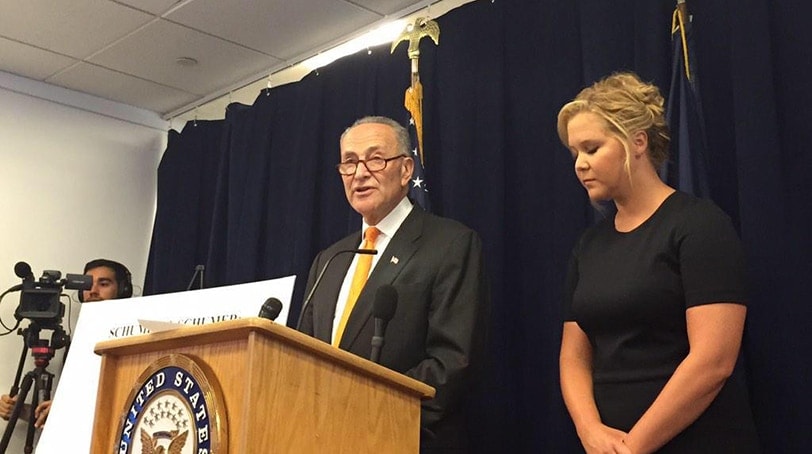 In a push to prevent future mass shootings like the one that took place last month in a movie theater in Louisiana, Sen. Charles Schumer on Monday announced legislation to motivate states to help plug holes in the national background check system.

The proposed bill will create monetary incentives and penalties for those states which submit or fail to submit pertinent records to the federal system.

Schumer’s cousin, actress and stand-up comedian Amy Schumer, was on hand to lend her support to the initiative.

“We’re here to say enough is enough to mass shootings in our schools, our college campuses, our military bases and our movie theaters,” the actress said. “These shootings have got to stop. I don’t know how else to say it.”

Schumer is not only connected to the legislation through her cousin, the New York senator, but it was during a screening of “Trainwreck,” a movie starring Schumer, at a Lafayette theater on July 23 that a gunman opened fire killing two people and injuring nine before fatally shooting himself.

“I’m not even going to say his name,” the actress said. “I’m not sure why this man chose my movie to end these two beautiful lives and injure nine others, but it was very personal for me.”

Following the shooting, Sen. Schumer last week called on the Federal Bureau of Investigation, the agency responsible for vetting potential gun buyers, to investigate how the Lafayette shooter was able to obtain a firearm, despite having an arson charge and involuntary commitment on his record.

That shooting came just weeks after another shooter, who similarly shouldn’t have been able to get his hands on a gun, shot up a black church in South Carolina, killing 12.

Alongside his call for improving the national background check system, Schumer also said the Department of Justice should study involuntary commitment standards and issue recommendations to states on preventing the mentally ill from obtaining guns. The senator also called on Congress to fully fund the Substance Abuse and Mental Health Services Administration, which saw $150 million of its budget slashed, Schumer said.

“In particular, American women are inordinately affected by gun violence, and are 11 times more likely to be shot and killed than women in other developed nations, said Shannon Watts, founder of Moms Demand Action for Gun Sense in America, part of Everytown. “It’s time for other leaders in politics and entertainment, and all Americans, to join the movement calling for common-sense public safety measures – like background checks on all gun sales – that will save American lives.”

Mayors Against Illegal Guns, now also under the Everytown umbrella, previously released a report exposing “fatal gaps” in the National Instant Criminal Background Check System, or NICS, and found that millions of mental health records were missing, rendering the system impotent against the fight to keep guns out of dangerous hands. Last year the group released another report called “Closing the Gaps,” which details some of the progress made by states that have passed legislation to improve reporting.

Patching this hole in the national background check system an area gun control advocates and individuals concerned with gun rights can agree on.

The National Shooting Sports Foundation launched its own initiative, FixNICS, to help encourage states to increase reporting of all records to the system.

But that’s where the compromise stops. The NSSF is calling for a fix of the current system, but wants to put a stop to new legislation aimed at repairing it.

The group recently railed against legislation aimed at closing what lawmakers are calling the “Charleston Loophole” by extending the waiting period on background checks from three days to indefinitely, which could give federal investigators ample time needed to thoroughly vet a potential gun buyer.

The term was coined after it was learned that the Charleston shooter obtained a firearm despite having a felony drug arrest on record, something the FBI missed while running his background check.

This article was updated from a previous version to include a 2014 report from Everytown on improvements made to NICS.