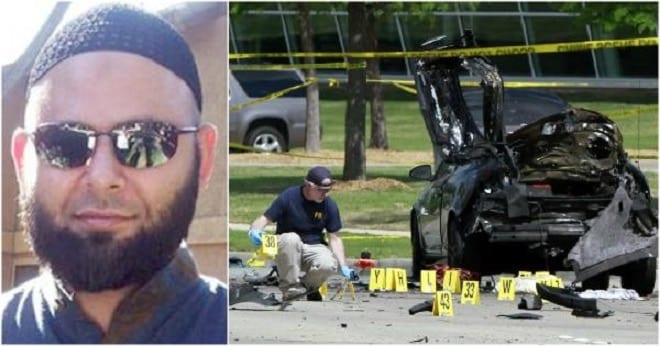 The chair of the Senate Homeland Security Committee is asking U.S. Atty. Gen. Loretta Lynch for an explanation on how Nadir Soofi obtained his gun, bought from a shop that was part of the ATF’s Fast and Furious operation. (Photo: AP composite)

Nadir Soofi, one of the terrorists left dead in the Curtis Culwell Center attack in Garland, Texas, in May has been tied to a gun purchased in the controversial Bureau of Alcohol, Tobacco, Firearms and Explosives gunwalking program.

Officers at the center killed Soofi, along with Elton Simpson, in a shootout during an exhibition of cartoon images of Muhammad displayed in a free speech exercise through the American Freedom Defense Initiative. Between the two, the perpetrators had six firearms of unknown origin.

Now, in a story first reported by the Los Angeles Times,  it appears that Soofi a half-decade before had purchased a handgun from a shop in Arizona which was under intense surveillance by the ATF.

The shop, Lone Wolf, was known to sell firearms to straw buyers and criminals with the expected end-user being Mexican narco cartels, but was allowed to continue operation as authorities aimed to track the movement of the illegal guns as part of a program that went down in infamy as Operation Fast and Furious.

The Soofi transaction was flagged on Feb. 24, 2010 for a seven-day hold but was released the next day without explanation.

The Federal Bureau of Investigation, tasked with jurisdiction over terror attacks in the U.S., has to date not released background information on the firearms used in the Garland attack.

While it was unclear if the gun went on to be used in the Garland attack or if Soofi, who had a minor criminal record, was at the time flagged as a prohibited firearms possessor, the chairman of the Senate Homeland Security Committee, Sen. Ron Johnson, R-Wis., is asking U.S. Atty. Gen. Loretta Lynch for an explanation.

As such, this would come as the latest in the ongoing Congressional investigation of the program that allowed the transfer of as many as 2,000 guns in the Phoenix and Tucson area to drug traffickers in Mexico from 2006 onwards. The investigation started in 2011 after whistleblowers tied the guns to the death of Border Patrol Agent Brian Terry as well as others in Mexico.

The high-risk tactics of gunwalking and non-interdiction of weapons, which goes against the core of the ATF’s mission, brought swift condemnation and Atty. Gen. Eric Holder became the first sitting Cabinet member to be held in contempt of Congress.

Now Lynch, who replaced Holder earlier this year, has inherited the scandal.