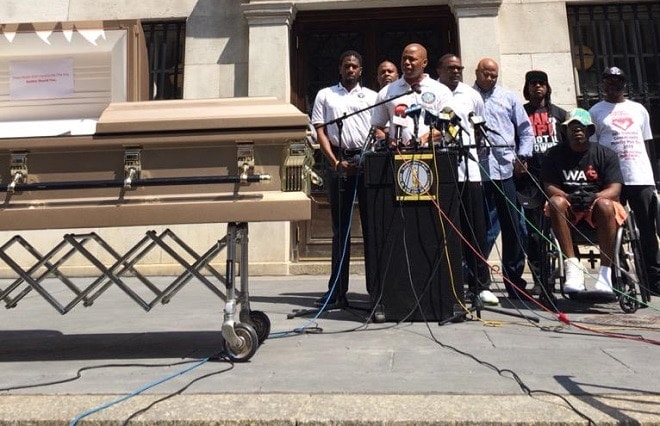 Brooklyn Borough leaders and gun control advocates stumped for an emergency infusion of cash from the City next to an empty coffin Monday. (Photo: brooklyn-usa.org)

Citing rising crime in the city and using a casket as a prop, borough leaders in Brooklyn demanded money from New York City to combat gun violence.

Brooklyn Borough President Eric Adams, along with Councilman Jumaane Williams appeared outside Borough Hall Monday to introduce their “Take Five to Stay Alive” program for which they are seeking $10 million from City Hall to help fund. The program was debuted following a weekend that saw 22 shot in the city, three of them fatally. Nine of these were wounded at a single house party in Brooklyn.

“Our children deserve to live, our adults deserve to live. All lives matter,” Adams told reporters. “The temperature rise cannot cause a rise in gun violence.”

The Take Five program advocated by borough leaders calls for those in the community to increase the reporting of suspicious or dangerous behavior.

“Don’t call it ‘snitching;’ call it leadership,” reads a campaign poster. “Raise your voice at police precinct council meetings in your area. Volunteer your time.”

Next, the program calls for residents to actively search their surroundings and be on the lookout for guns and “gun paraphernalia” that may be in their home and actively report it.

Steps three and four involve asking lawmakers in Washington and Albany to back a host of gun control measures including those that would mandate locking all firearms not in use and closing the so-called “Iron Pipeline” of guns into the city.

The fifth step of the program is to seek a $10 million emergency infusion to fund local organizations using such techniques as the Curb Violence model that employ “violence interrupters,” former gang members, to act as mediators in communities.

At the event, Adams similarly praised state Attorney General Eric Schneiderman for his commitment to getting ‪toy guns off New York’s store shelves, terming that drive, “critical to our work in battling gun violence.”

While data released by the New York Police show a 5-6 percent overall drop in crime when compared to last year at this time, they also show a 10 percent spike in murders through July 27.

However, when compared to figures from a quarter century ago, when murder rates soared to 2,245 in 1990, the 328 reported last year are a record low.

NYPD Commissioner Bill Bratton this week advised the city is seeking to put as many as 10,000 new officers on the streets, but cautioned that social matters – especially how the city interacts with its homeless community – are the answer to prevent a return to the bad old days in the Big Apple.

“We need to get this right because we cannot repeat the fiasco of the 1970s that we’re now feeling 40 years later in terms of the homeless issues, the emotionally disturbed,” said Bratton. “This is too important to get wrong.”

Brooklyn borough leaders advise the empty casket will remain in front of Borough Hall all week.