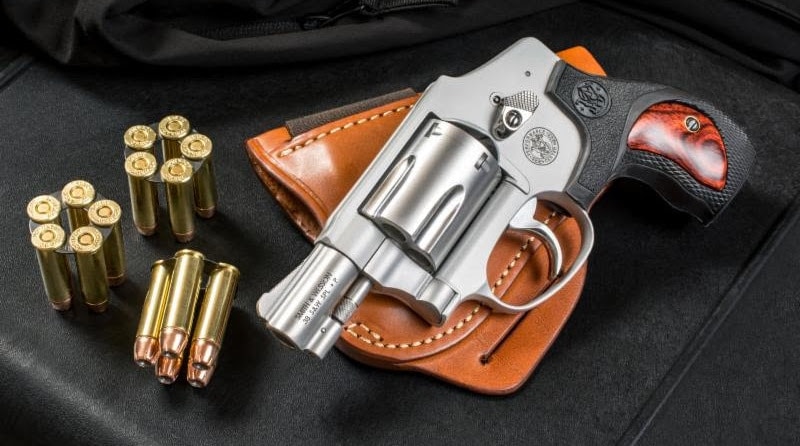 Smith & Wesson has put together a couple of new exclusives for Talo and United Sporting Companies for carrying concealed with class, a two-tone Model 642 with wooden-inset grip and a fancy engraved Bodyguard, respectively. Both guns blend classic styles with modern function.

The Talo 642 Airweight is based on one of Smith’s most popular revolvers for concealed-carry. It’s built on an alloy frame and chambered for .38 Special +P. A Performance Center revolver, this handgun has been worked over at the factory for a polished and chrome-plated double-action trigger that’s tuned for concealed-carry.

It’s a five-shot J-frame revolver with a polymer grip with hardwood inserts that offers the reduced recoil of a synthetic grip along with the classic looks of a traditional wood grip. The frame has a satin finish on the stainless steel cylinder and aluminum frame for a nice three-tone look.

The rest of the specs are pretty familiar for anyone considering an Airweight. It has a 1.875-inch barrel and an overall length of just over 6.3 inches. It weighs 15 ounces unloaded, which is light enough to carry in a pocket or an ankle holster but still has enough mass to deal with the hottest .38 SPL loads. It sports integral sights front and rear and the double-action-only hammer is concealed for a snag-free draw. 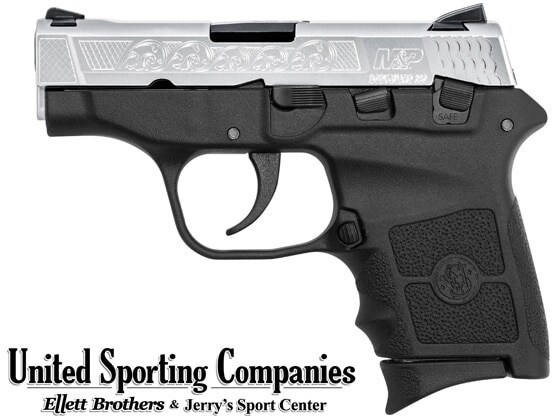 The satin stainless slide is embellished with a machine-engraved finish. (Photo: Smith & Wesson)

The Bodyguard .380 ACP is a more prevailing design that’s been classed-up with its machine-engraved scrollwork on the stainless steel slide. It’s got the M&P military and police branding along with the standard fish scale slide serrations side-by-side with the engraved patterns.

Like the Talo exclusive, the United Sporting Companies Bodyguard is otherwise standard, including the low-profile takedown lever, slide catch, manual thumb safety and magazine release. The new Bodyguard is compatible with existing aftermarket sights like night sights for concealed-carry.

The Bodyguard has a 6+1 capacity with its light and compact polymer frame with extended magazine and floorplate options available on the aftermarket. It has a 2.75-inch barrel and a frame width of about 0.8 inches. Unloaded the Bodyguard weighs 12 ounces, but with its locked-breech action the gun is still easy to shoot.

It’s a true double-action only design with second-strike capability in the case of a hard primer, and it has an ergonomic grip with fingergrooves on the frame and magazine floorplate. At just 5.25 inches long the new Bodyguard can be carried regardless of how you dress.