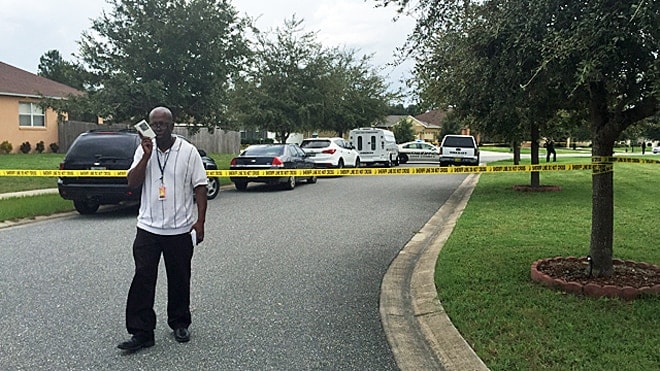 Residents say they all look out for one another and the neighborhood is normally quiet and crime-free. (Photo: WFTV)

When a couple went out for a mid-morning stroll in a Lake County, Florida, neighborhood Tuesday, they didn’t expect to find a burglar breaking into their neighbor’s home, but now the suspect is recovering from a gunshot wound after he charged at the man who confronted him.

It was just before noon when the couple – both of whom are retired police officers – was out for a leisurely walk and saw what appeared to be the suspect scoping out the neighborhood. A short time later, the man noticed the suspect again, only this time he was somewhere where the man knew he didn’t belong.

The man walked around to the back of his neighbor’s home and first noticed a window was broken before he saw the suspect inside trying to make off with a television.

“At that point a television came flying out the window,” Lt. John Herrell with the Lake County Sheriff’s Office told local media.

Herrell said the suspect realized he was caught and attempted to flee, but the retired officer gave chase and met him at the front of the house. According to the man’s account, he ordered the suspect to stop, but the suspect refused. And when he charged at the man, he feared for his own safety and fired a single shot, striking the would-be burglar.

The suspect was transported to the hospital where he was last listed in stable condition. His name has not been released, but authorities confirmed he is 16 years old and police are working to determine whether the teen acted alone.

The retired officer is said to be cooperating with authorities and at this point it appears no charges will be filed against him, although the investigation is ongoing.

For the most part, neighbors believe the man acted appropriately, and the homeowner whose house was targeted is calling him a hero.