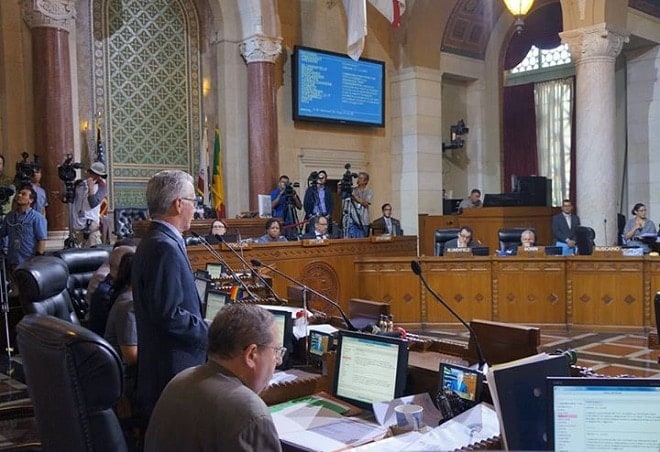 In a unanimous vote Tuesday, the L.A. City Council gave the go ahead to draft a law imposing a fine for those with unsecured guns in the City of Angels.

Los Angeles Councilman Paul Krekorian introduced the gun lock law last November with the council approving drafting the ordinance by an 11-0 vote just two weeks later before this week moving forward with a version that would refuse even retired police an exemption to its reach.

“Los Angeles‬ will become the largest city in ‪California‬ to require all handgun owners in the city to store their handguns in a locked container or disable them with a trigger lock when kept in their home,” said Krekorian in a statement. “The City Council unanimously approved the strongest, most significant law in the state that requires responsible gun owners to act responsibly. Every year, thousands of children are unintentionally killed or injured by handguns that aren’t stored properly in people’s homes.”

The measure, Council File 14-1553, goes further than current state gun safety requirements in mandating all handguns be stored in a locked container or disabled with a trigger lock that has been approved by the California Department of Justice. Those found in violation could face six months in jail as well as a fine of up to $1,000.

While law enforcement will not actively conduct checks for compliance, if summoned to a residence for an unrelated matter a gun owner found without their firearms properly secured could face charges.

The proposal will next be drawn up by City Attorney Mike Feuer, the inaugural co-chair of the new gun control group, Prosecutors Against Gun Violence, and is based on a controversial ordinance in San Francisco that has been challenged all the way to the Supreme Court.

Women Against Gun Violence, an area gun control organization, was on hand at the council meeting to make sure the measure passed without what they termed loopholes for either those with a rare concealed carry permit or retired law enforcement credentials.

“No one should be exempt from common sense gun safety measures,” said the group in a statement.

The National Rifle Association opposes both the gun lock measure as well as an ordinance passed last week prohibiting the possession of grandfathered magazines capable of holding more than ten rounds.

“The only people who will be affected by these misguided anti-gun ordinances are the law-abiding gun owners whose Second Amendment rights and inherent right to self-defense are being infringed by them,” reads a statement from the NRA. “Criminals will certainly not respect and obey these flawed ordinances.”

A final draft is set to be reviewed by the council in coming weeks, incorporating changes recommended Tuesday.