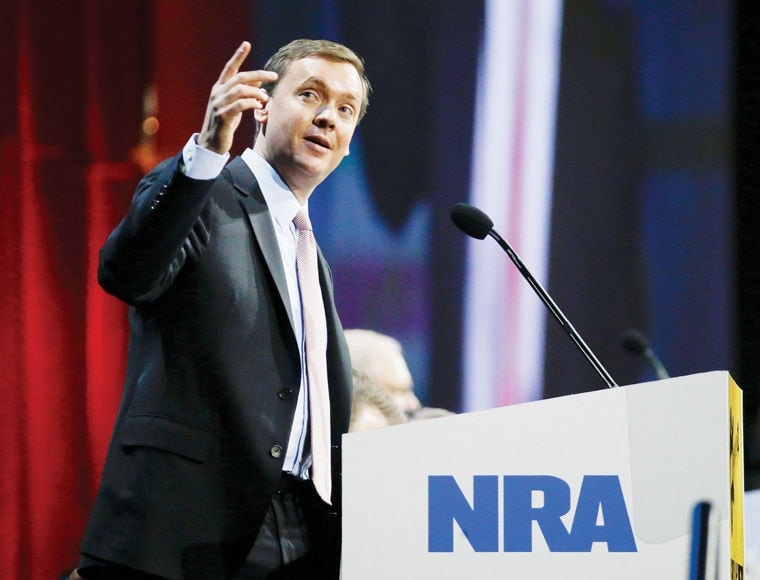 Chris Cox, executive director of the NRA-Institute for Legislative Action, speaks during the annual meeting of members at the NRA convention in Nashville. (Photo: Associated Press)

Hours after a Republican senator introduced legislation to fix the mental health aspect of the background check system on Wednesday, the National Rifle Association issued an official statement explaining why it’s throwing its weight behind the bill.

If implemented, those deemed incompetent to handle their own finances would get reported to the National Instant Criminal Background Check System, which is used to screen gun buyers, and could potentially affect a large group of Social Security recipients.

“The NRA is fighting to stop the Obama administration from denying millions of veterans and social security recipients their Second Amendment rights for no other reason than they want assistance in managing their financial affairs,” said Chris Cox, executive director of the NRA’s lobbying arm.

U.S. Sen. John Cornyn (R-TX) said his bill, the Mental Health and Safe Communities Act, would enhance the current gun background check system and bolster local and federal support for mental health treatment and precautions. Yet, the bill’s language was not available at the time of writing this piece.

“We thank Senator Cornyn for his leadership in standing up to the Obama administration and introducing legislation that will take meaningful steps toward fixing America’s broken mental health system,” Cox said.

However, Cornyn’s legislation follows a shooting in Lafayette, Louisiana, where a gunman opened fire at a movie theater killing two and injuring nine. Despite documented mental health issues, the gunman passed a background check to obtain a firearm. It’s not entirely clear how the issues slipped through the cracks, but lawmakers have called for an investigation to further understand the incident.

The NRA said Cornyn’s bill would create due process protections; ensure safeguards so veterans arbitrarily deemed unfit could have rights restored; refine and bring uniformity to the system; and grant immediate relief to those denied because of bureaucracies in the system.