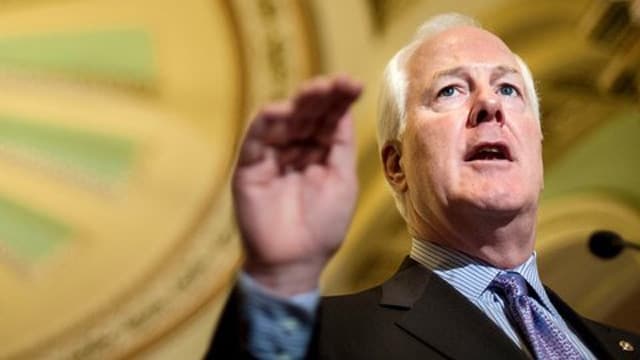 Legislation designed to enhance the current gun background check system by improving the identification and treatment of dangerous, mentally ill individuals was proposed Wednesday by the U.S. Senate’s number two Republican with endorsements by the National Rifle Association.

The Mental Health and Safe Communities Act aims to fix the existing background check system without expanding it, said U.S. Sen. John Cornyn (R-TX) in his announcement of the measure. The bill also aims to bolster treatment options for mentally-ill offenders, and response and prevention plans for local officials.

“While potentially dangerous mentally-ill individuals are often known to law enforcement and local officials, gaps in existing law or inadequate resources prevent our communities from taking proactive steps to prevent them from becoming violent,” said Cornyn, who voted down legislation in 2013 to expand background checks to include online and certain private sales.

“We thank Senator Cornyn for his leadership in standing up to the Obama administration and introducing legislation that will take meaningful steps toward fixing America’s broken mental health system,” said Chris Cox, executive director of the NRA’s lobbying arm.

Along with the NRA, the bill was endorsed by seven other advocacy groups that focus on issues ranging from mental health to law enforcement to corrections. However, the language of the bill was not readily available during the writing of this article.

The federal background check system for gun purchases has been the subject of debate for the better part of two months.

Last month’s shooting at a movie theater in Louisiana sparked the senator’s response to refining the mental health component to background checks. Despite having documented mental health issues, the gunman’s issues were not flagged when he bought the gun he would use to kill two and injure nine.

The weeks before that two other high-profile mass shootings by gunmen with mental health and criminal backgrounds sparked lawmakers and the public alike to launch queries into how they were able to pass background checks and obtain firearms.

Two days ago U.S. Sen. Chuck Schumer (D-NY) introduced legislation also in response to the Louisiana shooting that would compete with Cornyn’s bill.