Florida bear season permits go on sale, and Nugent has his 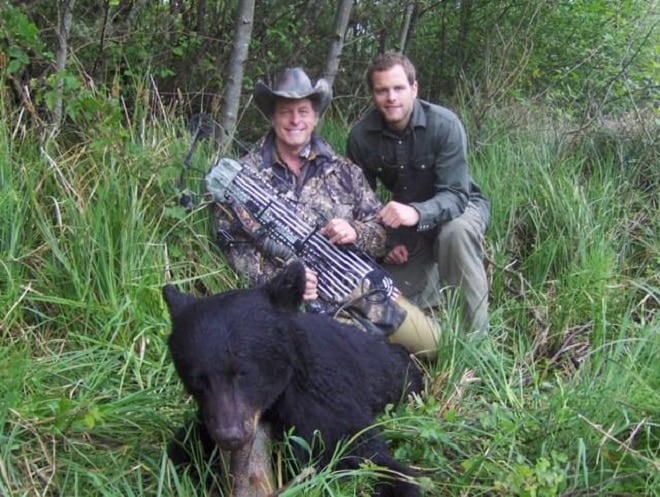 Rocker and NRA board member Ted Nugent is headed to Florida this fall to take part in the state’s first bear hunt since 1995. (Photo: Facebook)

Special use permits for the first bear season in the Sunshine State this century went on sale this week and hunter’s rights advocate Ted Nugent picked one up.

The permits, which became available for both resident and non-resident hunters Monday, are for the state’s controversial new open season on black bear. The Florida Wildlife Commission estimates that over 3,000 black bears are now roaming the state and of the 16 known bear attacks on humans in the state, four have occurred in the past year.

Although anti-hunting groups sought to stop the proposed hunt in favor of increased community education and bear-resistant trashcans, FWC approved the limited season in June to help trim numbers to a more manageable level in conjunction with the other forms of mitigation.

And the Nuge is one of some 1,100 hunters who have ponied up the cash – $100 for residents, $300 for non-residents – to attempt and obtain a Florida black bear.

“Wildlife can only be one of two things: It can only be an asset or a liability,” Nugent told the Orlando Sentinel, citing the spike in nuisance bears. “Currently the Central Florida bear population is a liability because it is not valued as the renewable resource that God designed it as.”

Nugent decried the claims of anti-hunting groups that the upcoming hunt in the state is a trophy hunt, as he intends to use the entire animal.

“The reason there hasn’t been a bear season until now – even after more than 6,000 nuisance complaints – the reason we’ve waited so long is because of the scourge of political correctness dispensed by the idiots who claim the defenseless animals need protecting,” said the Motor City Madman.

The season will take place in four of the FWC’s seven Bear Management Units across 40 counties for which the permits are issued. The season will vary between units, with some just set for two-day hunts while others could see a full week. No bait or dogs can be used while animals harvested must be mature and ideally over 100 pounds in weight.

However, animals in the state are getting larger, with the state’s longstanding record for the largest bear being shattered by over a hundred pounds earlier this year when a 740-pound leviathan was captured by FWC officials and destroyed. It had been seen often in a suburban area and, a regular at local garbage cans, had lost its fear of humans.

The season, overall set to run from Saturday Oct. 24 to Friday, Oct. 30, may end earlier in any BMU if the area’s harvest objectives are reached.