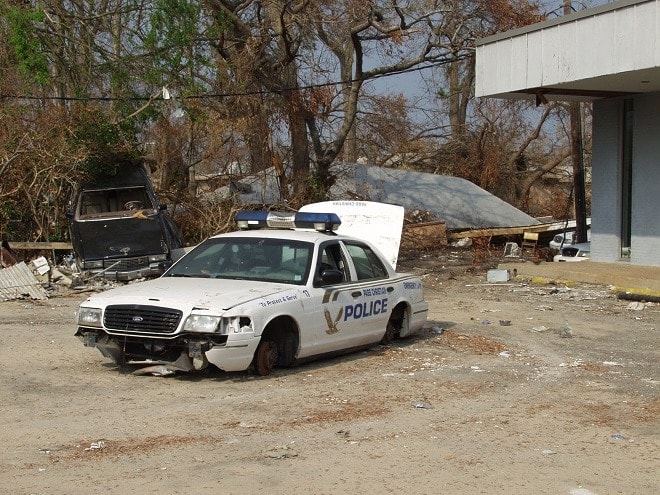 Officers in a small Mississippi town are being forced by the state auditor to turn guns donated 10 years ago by Glock. Image is of a washed out marked unit of the Pass Christan Police Department following Katrina.(Photo: Chris Eger/Guns.com)

After police in a small town lost their personal guns in an epic natural disaster, Glock donated new ones, which the state auditor now wants turned in a decade later.

Waveland, Mississippi, located near the Louisiana line, was “ground zero” of Hurricane Katrina’s 2005 landfall when 26 feet of seawater slammed into the coastal community, killing an estimated 50 residents. The town’s small police force,  forced from their building by rising water, lost all of their vehicles and equipment.

Following the storm, firearms industry powerhouse Glock, hearing that the officers– who carried their own guns, not weapons provided from the city– had theirs effectively destroyed, donated 29 new Glock Model 22 .40 caliber handguns to the force.

Now ten years later the state auditor’s office wants the guns returned to the city by the individual officers or they will be listed as stolen.

“When Katrina hit, they hung onto a bush for eight hours in front of the police station just to save their own lives. In the process, they lost all of their weapons that they had,” explained Waveland Mayor Mike Smith to WLOX.

State officials contend the weapons should have become city property when they were donated, even though they replaced personal firearms, and now wants them all accounted for or the officers who signed for them have to pay the city $400 for each gun.

“Out of those 29 guns, there are only a handful of people that still works there. The rest of them are working somewhere else. Being able to retrieve those guns is very difficult, and if the guns are not returned and if the money is not paid, then those guns will be listed on NCIC as missing weapons or stolen,” according to Smith.

Smith advised that he, the Waveland Police chief, and the state auditor are working on a solution.

This article has been updated to point out the unit shown in the image is of the Pass Christian Police and that Waveland PD did not exit the city library during the Hurricane.