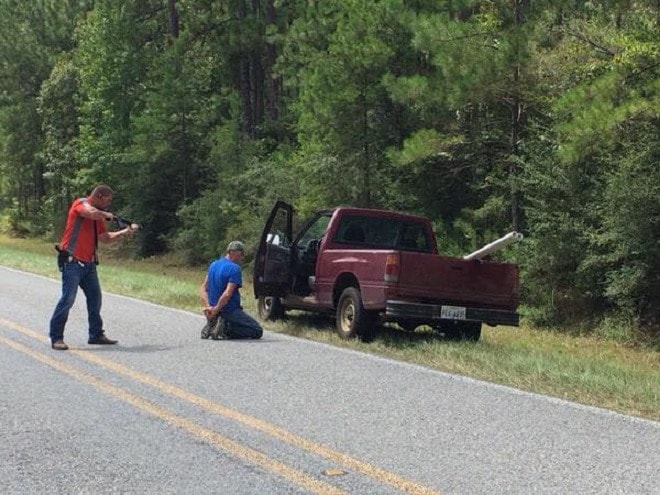 Police in Mississippi have a 61-year-old man in custody after two incidents near a large National Guard base sent troops seeking cover.

Earlier this week authorities near Camp Shelby, a huge state-owned Joint Forces Training Center in a rural area south of Hattiesburg put the base on alert after troops thought they heard shots coming at them on two occasions.

Base officials on both Tuesday and Wednesday reported gunfire near the base, where some 4,600 reservists of the 155th Armored Brigade Combat Team are currently undergoing training, with no injuries. In each case, an older white male driving a red pickup truck was spotted leaving the area near Hwy 29 in Perry County.

Now authorities have the suspect, Alfred Baria, 61, in custody.

As reported by WDAM, Baria admits he is the man Mississippi police have had a dragnet out for, but is adamant it was the mechanics of his vehicle to blame and not gunfire for the uproar.

Meanwhile, federal authorities including members of the Bureau of Alcohol, Tobacco, Firearms and Explosives searched Baria’s home and found guns, which as a convicted felon he is prohibited from possessing.

Baria currently faces two felony charges for possession of a firearm by a convicted felon and four misdemeanor charges for disturbing the peace of a person.

The matter has been turned over to the Mississippi Bureau of Investigation.