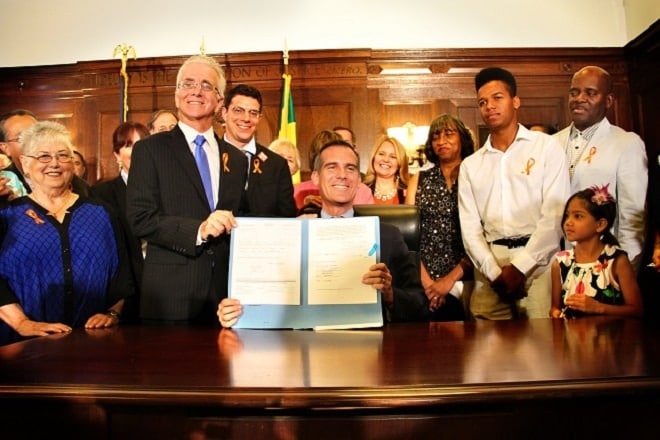 In 60 days, there will be no such thing as a legally grandfathered civilian-owned magazine capable of holding more than 10 rounds in Los Angeles.

Mayor Eric Garcetti signed the citywide ordinance Friday prohibiting the ownership of what the state deems large-capacity detachable firearm magazines. The controversial measure was introduced by City Councilman Paul Krekorian and passed the council by unanimous vote on July 28.

Krekorian, along with gun control advocates, joined Garcetti at City Hall for the signing ceremony.

“I am committed to reducing the gun violence in our city,” Garcetti said. “This ban is part of that larger effort. It will help keep our streets safer and help prevent the magnitude of mass shootings. We are sending a clear message – we will not wait for Washington to act, we are ready to act now.”

People who currently possess such magazines, many for collectable firearms registered decades ago, have a 60 day window to remove them from the city, sell them to a legal gun dealer, or turn them into the Los Angeles Police Department.

Exemptions are in place for Hollywood prop masters, gunsmiths, law enforcement, museums who have such magazines on display and anyone with a grandfathered mag to a weapon for which there is no 10-round magazine produced.

Krekorian, the author of the ban, painted the new prohibition as a lifesaver, saying, “These magazines may not be the cause of gun violence, but when shooters use them, tragedies turn into massacres.”

The National Rifle Association, who challenged similar confiscatory bans in Sunnyvale and San Francisco, are pledging action on the City of Angles latest attempt at gun control.

“This ordinance will not prevent violent crime or mass shootings, but it does limit the Second Amendment rights of law-abiding gun owners who choose these magazines to defend themselves and their families,” reads a statement from the gun rights organization.

“As most gun owners already know, magazines holding more than ten rounds are standard equipment for many popular pistols and rifles, especially those that are selected for defensive purposes. These standard capacity magazines are possessed by millions of law-abiding Americans for a variety of lawful purposes, including self-defense,” the statement reads.

City Attorney Mike Feuer, who drafted the law at the request of the Council, contends that it is virtually lawsuit-proof.

“We have considered the possibility that the second revised draft ordinance might be challenged on the grounds that it is preempted by State law or violates the Second Amendment of the United States Constitution,” Feuer told the Council in a memo prior to their vote. “We believe the second draft ordinance is legally defensible on both grounds.”