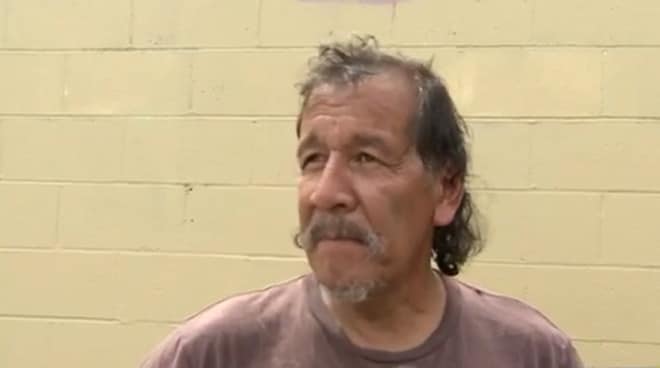 Paul DeLeon, who is homeless, is being called a hero after he stopped an attack on a 19-year-old woman by her ex-boyfriend. (Photo: ABC)

A homeless man who resides in Fresno saved a young woman’s life Wednesday night when he saw the woman being severely beaten in a parking lot.

The 19-year-old woman, who has not been identified, was approached by who was later found to be her ex-boyfriend outside of a liquor store. The woman apparently tried to avoid a confrontation and drove her car away to another area in the same parking lot, Paul DeLeon, who witnessed the incident, told a local ABC affiliate.

But the ex-boyfriend approached the woman for a second time, pulled her out of the car and began kicking and punching her with such force that it knocked her to the ground. As the woman laid there unconscious, the suspect continued to assault her, repeatedly kicking her in the head, and it was at that point DeLeon knew he had to do something.

“I couldn’t just stand there and do nothing,” DeLeon told reporters. He was armed with both mace and a handgun, but chose to use the less lethal of the two – during the first attack, that is. DeLeon said he sprayed the woman’s attacker in the face with his mace, and although it stopped the suspect from continuing to beat the unconscious woman, it also further infuriated him.

“They drove off and he said something like, ‘I’m going to come back for you,’” DeLeon said. “And he did.”

A few minutes later, after the teen was already in an ambulance and on her way to the hospital, the white Lexus occupied by the suspect returned to the parking lot and the suspect opened fire on DeLeon, striking him once in the arm. But unbeknown to the suspect, DeLeon wasn’t just carrying mace, he was also armed with a legally owned handgun. The man returned fire toward the suspect, who immediately fled the parking lot.

DeLeon, who was called a Good Samaritan by the Fresno County Sheriff’s Office, was transported to the hospital to receive treatment for the gunshot wound. Both he and the teen victim are expected to make a full recovery.

Authorities later caught up with the suspect on a nearby highway, but he was lost after speeds reached more than 100 miles per hour. The Lexus was later found abandoned.

Police think they know the identity of the suspect, although that information is not being released at this time. It’s unknown if the suspect was struck by DeLeon’s gunfire.

DeLeon said he believed that, given the brutal nature of the crime, had be not intervened the suspect likely would have killed her.