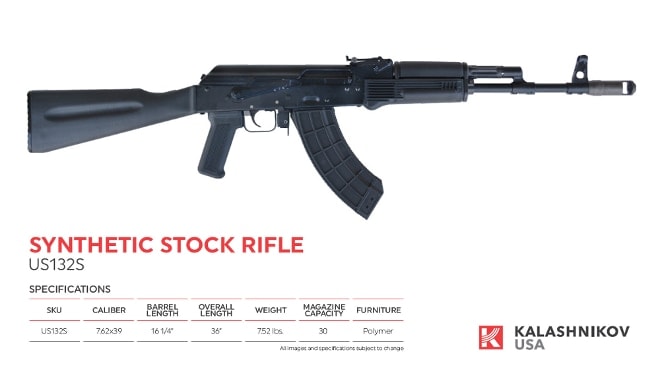 Kalashnikov USA has just announced the suggested retail prices for its first series of American-made AK-pattern rifles and shotguns built in Tullytown, Pennsylvania, using all-American components. Prices range from $719 to $999.

Some of the products look very familiar including the $719 US132 which is a dead ringer for the IZ132, commonly called the Saiga 7.62x39mm Sporter. The list price is a bit higher but that does include a full compliment of 922r-compliant parts, which were a hidden cost with the original Saiga Sporters for many shooters.

The company is rolling out four more models in addition to the four we’ve already seen, mostly priced around $800. The rest of the American AKs are “converted,” or offered in the standard AK configuration with a discrete buttstock and pistol grip. 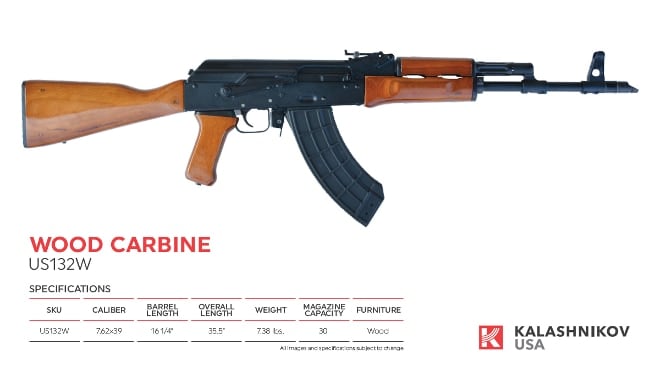 Kalashnikov USA will launch with five conventional AKs chambered for 7.62×39 with traditional and tactical furniture supplied by Command Arms Accessories, including the US123W, A classy wood-stocked model that runs $839. The hardwood furniture has a medium chestnut tone with a semi-glossy finish that most traditionalists will approve of.

The US123S is their modern standard AK, with Russian-style synthetic furniture and a single-baffle muzzle brake, priced at $799. For a little less they offer the US132L which has a Russian-type fixed stock, a CAA pistol grip and Saiga-style forend.

The US132Z is the flagship tactical 7.62×39 rifle, completely decked out with CAA furniture including an adjustable stock with cheekpiece, forward pistol grip and railed handguard for $924. All 7.62×39 rifles ship with reinforced 30-round magazines except the Sporter, which ships with a 10-rounder. 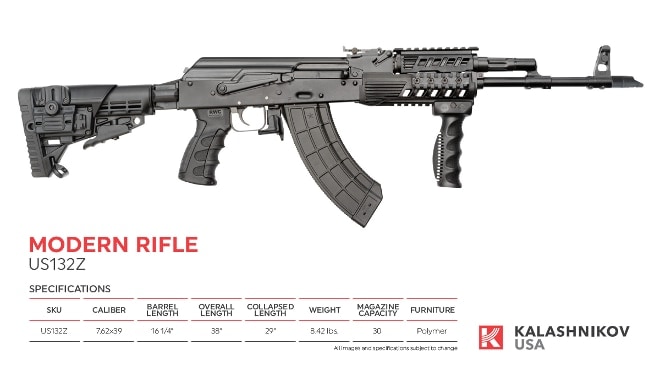 Also listed are two 12-gauge shotguns, the more basic US109L and the competition-ready, practical-tactical US109T. At $999 the US109T is their most expensive firearm, although it does come with an adjustable buttstock, beefy three-baffle muzzle brake and extended 10-round magazine. The $874 US109L has a fixed stock, no brake and standard five-round box magazine.

These prices are a little steeper than their Russian-made counterparts But these prices also include all-American-made components including all compliance parts, and the new barrels with a ferritic nitrocarburized finish. Nitride finishes offer several advantages over chrome lining including corrosion and wear resistance and a smoother, potentially more-accurate bore.

And these price points are still competitive with other quality AKs out there, including Molot and Arsenal in addition to up-and-coming American brands. Like with most guns, the MSRP is just a suggestion, and real-world prices are often significantly less.