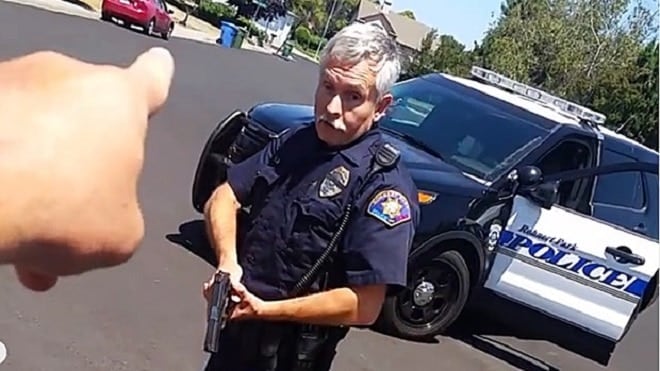 An officer seen drawing his pistol on a California man last week has been placed on administrative leave as the city faces a lawsuit.

In a video that went viral last week,  Rohnert Park Public Safety Officer Dave Rodriguez can be seen interacting with area resident Don McComas. The five-minute video shows Rodriguez drive his marked unit on the roadway in front of McComas’s house, where the homeowner was hitching his boat trailer to his vehicle.

After filming Rodriguez with his cellphone for a couple minutes, McComas captures the officer first filming him in return, then stepping from his vehicle and drawing his pistol after ordering McComas to take his hand out of his pocket without compliance.

The interaction ends with Rodriguez reholstering and leaving the scene after McComas contends he is unarmed.

Now, with the video seen over 430,000 times on YouTube, more than 1.3 million times on Facebook and mirrored across multiple websites, Santa Rosa attorney Daniel Beck and his son, attorney Jarin Beck, have announced they are representing McComas in pending litigation with the city over the encounter citing civil rights violations.

The attorneys paint McComas as a longtime and respected resident and father, and stated he feared at the time he was going to be shot by Rodriguez.

“That is a position of assault,” Daniel Beck said, showing the footage of the incident with the officer’s gun presented. “Mr. McComas did nothing to deserve that position. … So our position is that we have a clear abuse and we’re going to pursue it.”

Rohnert Park, a planned community of some 40,000 in Northern California’s Sonoma County is circling the wagons with the nationwide publicity of the incident.

The Police Department canceled a planned “Coffee with a Cop” event last week citing, “We have information that individuals from outside the community have voiced an interest in using this event to cause a disturbance, potentially putting our community and citizens at risk.”

While city managers look into the incident, they have placed Rodriguez on paid administrative leave.

Meanwhile, the officer at the center of the firestorm has retained private counsel and looks forward to telling his side of the story.

“While some aspects of their contact were captured on video, Officer Rodriguez is eager to share a complete accounting of the events which led to his contact with Mr. McComas as well as a complete description of what occurred during the recording,” said Doug Foley, the officer’s attorney.