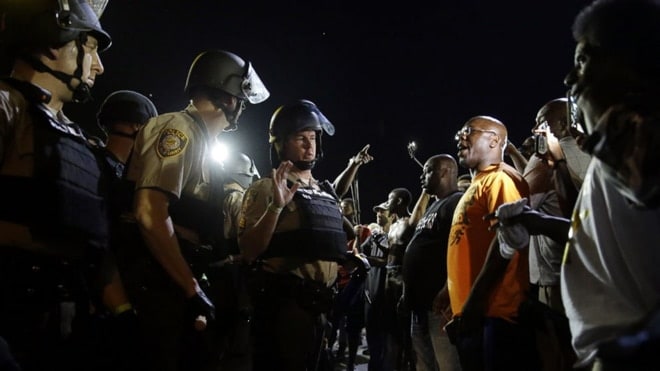 Protests marred with civil unrest and bursts of violence have once again filled the streets of Ferguson, Missouri, as parts of the city continue to recover from the violence it saw one year ago after 18-year-old Michael Brown was fatally shot by Ferguson Police Officer Darren Wilson.

The anniversary of Brown’s death was Sunday, coinciding with what has so far been four days of protests. And while protests remained peaceful throughout the weekend, things took a chaotic turn late Sunday night and into Monday morning when gunshots rang out in the city.

According to authorities, the shootout was initially between two separate groups of agitators. St. Louis Police Chief Jon Belmar estimated about 40 shots were exchanged, but when one of the suspects, 18-year-old Tyrone Harris, fled through a parking lot, he was subsequently confronted by four plainclothes officers in an unmarked vehicle.

Harris opened fire on the unmarked car, Reuters reported, and a foot chase ensued. Shots were exchanged between Harris and the officers during the altercation, resulting in serious injuries for Harris, who remains in police custody at the hospital.

Harris was last listed in critical condition and, if he survives, will face four counts of assault on law enforcement, five counts of armed criminal action and one count of shooting at a motor vehicle. The officers were uninjured, but all were placed on administrative leave.

Belmar was quick to point out that those involved in the exchange – including Harris – “were criminals; they weren’t protesters.” But the family of Harris, who was apparently out on bail during the protest and awaiting trial for stealing a motor vehicle, theft of a firearm and resisting arrest, said he never had a gun and was simply running away from the gunshots like everyone else in the area at the time. However, authorities confirmed the gun recovered from Harris Sunday night was stolen. 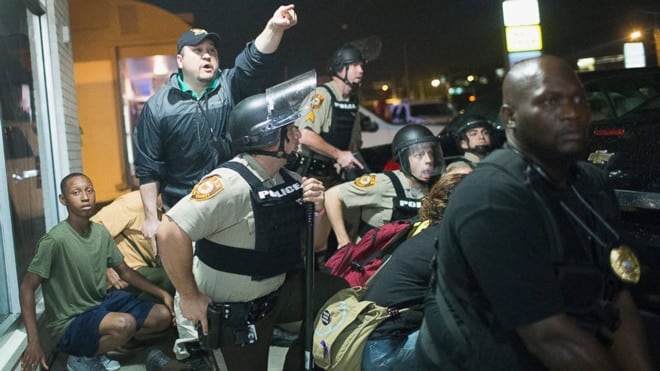 Other violent protesters hurled rocks and frozen water bottles at the police, according to reports from CNN, while others set fires and vandalized and looted area businesses.

“It’s stressful. It’s so frustrating,” said Dellena Jones, whose West Florissant Avenue hair salon was one of the businesses that was targeted, ABC News reported.

Jones said she was still recovering from the damage caused during last year’s riots. And the recovery has been centered around more than simply rebuilding the physical structure. Jones said when the vandalism hit last year, her young children were inside the salon with her when rocks and other objects were being thrown through the windows. She said the experience left her children traumatized and she spent all of Monday morning in tears, trying to figure out how she will reopen her shop and move forward.

“I’ve been trying to keep going for my children,” Jones said. “So… failure is not an option.”

Gov. Jay Nixon called the violence “a sad turn of events,” as officials worked to bring the chaos to an end before it worsened.
“The recent acts of violence will not be tolerated in a community that has worked so tirelessly over the last year to rebuild and become stronger,” County Executive Steve Stenger said in a statement.

St. Louis County officials declared a state of emergency Monday, following Sunday night and Monday morning’s violence. The order will allow the distribution of money and materials “to protect the health and safety of residents” and gives authority to law enforcement to perform “all duties necessary with respect to preservation of order.”

“This isn’t the way to solve anything,” she said.