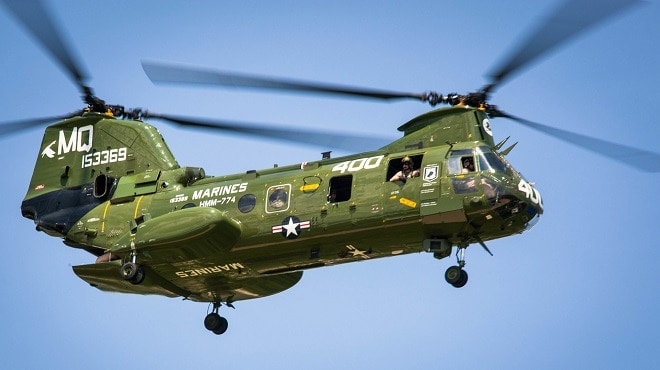 The Marine Corps bid farewell to the final Boeing-Vertol CH-46E Sea Knight in military service this month as the last one flew to the Smithsonian.

The Sea Knight, more commonly just called the Phrog by six decades of Marines, was the go-to medium lift transport for the Corps from Vietnam through Afghanistan with dozens of embassy evacuations, humanitarian and disaster relief missions mixed in for good measure.

These iconic aircraft have been rapidly replaced in service over the past decade.

In April the last active-duty CH-46 squadron, the Camp Pendleton-based Knightriders of HMMT-164 was converted to the tiltrotor MV-22B, becoming VMM-164. The squadron had flown the Sea Knight since 1966.

This left the reserves of HMM-774 as the last unit to fly the aircraft in U.S. service and the final hop of the squadron was on August 1 when #153369, numbered 400, was flown to the Smithsonian’s National Air and Space Museum’s Steven F. Udvar-Hazy Center in Chantilly, Virginia to be put on public display.

For her last ride, 400 was given the same Vietnam-era jungle green and high-viz white scheme the CH-46E she used in that conflict. Officially still property of the National Museum of the Marine Corps, 400 is on loan to the Smithsonian and on public display.

Remember gang, skids are for kids