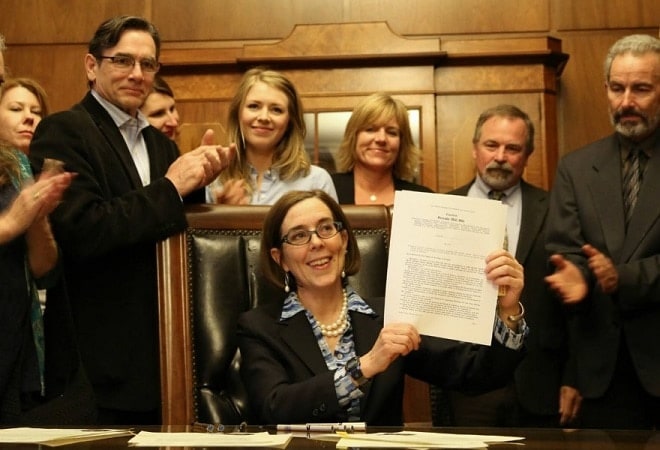 Gov. Kate Brown (D) signed legislation in May making Oregon the eighth state to adopt the expanded Brady checks after it narrowly passed the Senate in a 17-13 party line vote in April and squeaked through the House 32-28.

The bill that is now law, SB 941, requires that all private gun sales take place through licensed firearms dealers who would perform background checks. There are some narrow exceptions for family transfers, loans at shooting ranges, law enforcement, and – in some cases – inherited firearms, but disregarding these, all others must go through a dealer.

Further, state law requires that the thumbprints of the purchaser be kept on file with the dealer for at least five years following the transfer, and be made available to law enforcement upon request.

The expansion was pushed by local groups to include the Oregon Alliance for Gun Safety and seasoned gun control organizations such as the Brady Campaign and former New York Mayor Michael Bloomberg’s Everytown for Gun Safety who contend a dangerous loophole in the law is now closed. The latter funded an ad buy, featuring former Portland Police Chief Mike Reese, debuting this week citing Everytown’s own research into the effectiveness of expanded checks and asserting most Oregonians live within 10 miles of a licensed gun dealer.

However, whether that dealer is going to process a check is far from guaranteed. While the state has over 2,000 federal firearms license holders, many of those are collectors who do not maintain a storefront, and others just aren’t going to process checks for customer’s not buying guns from them despite the incentive of collecting a $25 fee allowed by the new law.

Warren Lacasse, owner of The Gun Room in Portland, told KOIN he won’t do the background checks for people making private transfers, which is within his rights.

“We’ve had a couple phone calls,” he said. “My answer is going to be simple: Go to the state police.”

Portland based retail chain Fred Meyer, who include sporting goods counters with guns and ammo at 20 of its supermarkets, likewise will not perform the checks.

Further, many rural counties are treating the new law as a non-starter.

In June, the Lane County Board of Commissioners– ironically in bill sponsor Prozanski’s district– voted 4-1 not to enforce the unfunded law, citing lack of money for prosecution and concerns over Second Amendment rights.

Josephine County Sheriff Dave Daniel told Oregon Public Broadcasting his department is overstretched as it is trying to cover property and personal crimes in his jurisdiction and won’t be enforcing the background check law, which is neither. In the end, he contends, it is an issue of money and return on investment of public dollars.

“The bad people are going to get guns regardless, whether this law makes a difference or not in how they do their gun transfers,” said Daniel.