There are a few changes to the chassis to accommodate .45 ACP and the new PPQ M2 has a thicker and longer slide that rides a little higher over the bore out to the end of the lengthened 4.25-inch barrel. 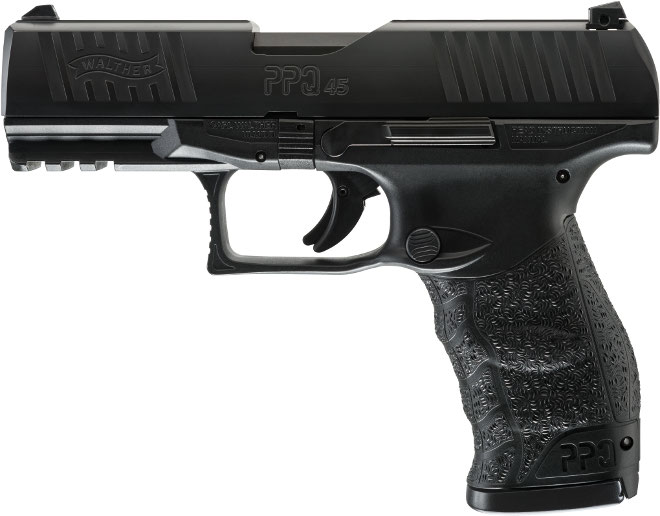 The redesigned ejection port shows off one of the big changes to the design. (Photo: Walther)

The entire pistol has been slightly enlarged for .45 ACP. It’s taller by about half an inch and weighs a quarter pound more than the 9mm Luger version. Still, at only 28 ounces unloaded it’s about average for this generation of service pistols and doesn’t slouch in the capacity department with 12 rounds of .45 in the magazine plus one in the chamber.

Most importantly, the PPQ 45 has the same controls as the PPQ M2, including the ambidextrous slide lever, reversible magazine catch and renown factory trigger. The PPQ 45 has the same smooth 5.6- to 6-pound trigger with a practically-instant .1-inch reset. The overall trigger pull is just .4 inches long. 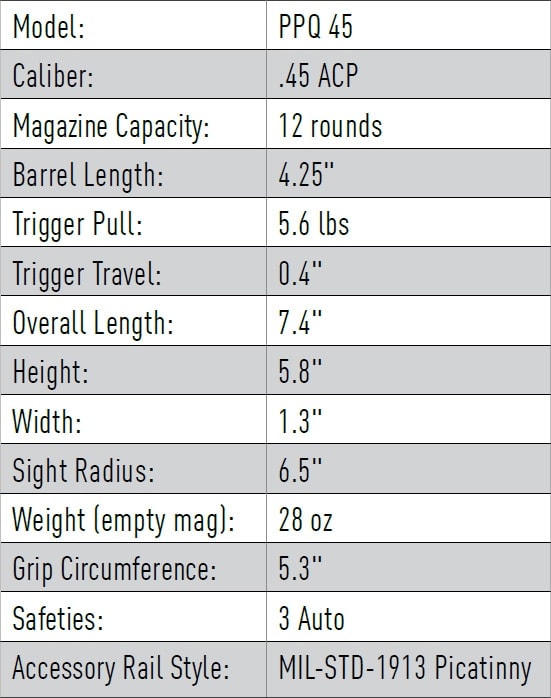 The PPQ 45 comes with three interchangeable backstraps, small, medium and large to fit different hand sizes and uses polygonal rifling for an improved gas seal, less bullet deformation and increased velocity and accuracy over conventional rifling. The metal parts have a deep Tenifer nitride treatment for a long-lasting, corrosion-resistant finish.

The design maintains the three passive safeties, the trigger bar safety, striker safety and drop safety. Each pistol comes equipped with 3-dot sights and has a suggested retail price of $699. Extra magazines are listed at $46.

The PPQ 45 is slated to hit stores this October. Normally we see street prices that are less than MSRP but we’re expecting the demand on this gun to be high, and even Walther expects stores to sell out, fast.

If you’ve been holding out for one of the recent next-gen service pistols to come out in .45 ACP the wait is almost over. Walther doesn’t have a product page up quite yet and we’ll be sure to keep everyone in the loop as details emerge.