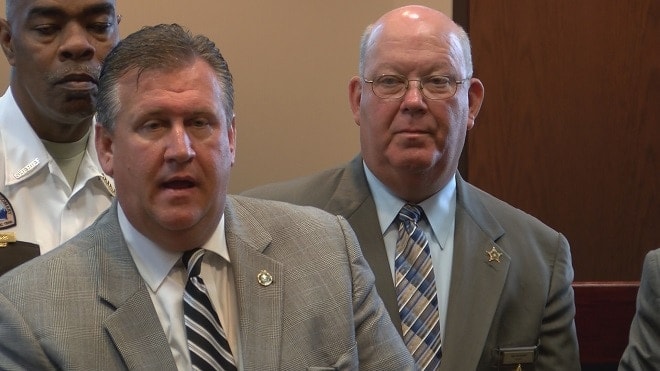 Russell County Sheriff Heath Taylor led a group of Alabama sheriffs Tuesday in an effort to keep the current prohibition on having a ready firearm for self-defense in personal vehicles. (Photo: WRBL)

Bemoaning the loss of may-issue practices, a group of Alabama sheriffs assembled Tuesday to stand against a bill to expand carry rights to vehicles in the state.

At stake is a measure proposed by Sen. Gerald Allen, R-Tuscaloosa, which would allow the carry of loaded guns in vehicles by those without a current concealed carry permit. The measure passed the Senate Committee on Finance and Taxation by a 7-1 vote without debate earlier this month. The bill had passed the Senate as a whole during the regular session in May but was left in a holding pattern until brought back up in the current special session.

And the sheriffs do not want it.

“There’s legislation being put forward that wants to allow you to have a loaded weapon in your car, under your seat, without any background check, without any pistol permit as an extension of your home,” Russell County Sheriff Heath Taylor said Tuesday. “And we are absolutely opposed to that.”

Gun rights groups point out that getting SB 14 through the current extended session, which requires a two-thirds vote in both chambers, is a long shot, but is one worth taking.

“While passage of this important legislation during the Special Budget Session would be subject to significant procedural obstacles, the fact that the Senate is reexamining the issue is indicative of the immense amount of support within the Legislature for this bill,” says a statement from the National Rifle Association’s Institute for Legislative Acton. “With support continuing to grow, gun owners around the state should remain hopeful that lawful concealed vehicle carry without a permit will become state law in the not-too-distant future.”

Allen, who attempted the bill in 2014 as well, promised to return with it next year if its defeated this time around.

Waxing poetic for a return to may issue

Besides opposing the guns in cars legislation, the group of more than a dozen sheriffs used Tuesday’s gathering to argue that recent changes to state law made in 2013 removed a lot of their power when it comes to issuing concealed carry permits.

Taylor cited a 2006 instance where an Alabama sheriff declined to grant a permit to John “Rusty” Houser, who later went on to open fire in the Grand Theatre in Lafayette, Louisiana last month, killing two. The lawman argued that under current state law, a sheriff might not have as much discretion.

State lawmakers argue the sheriffs are off base in their argument, citing chief law enforcement officers may still deny permits with justification backed up in writing, leaving the courts to settle the matter.