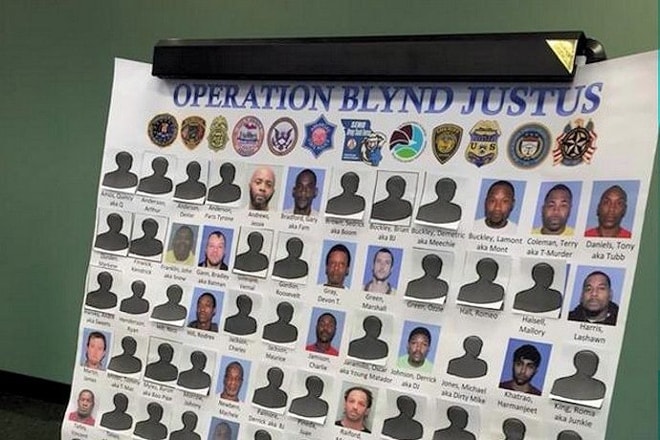 The investigation resulted in 40 federal indictments and arrest warrants for more than 70 people. (Photo: Fox)

Following a two-year investigation, a collective effort between more than a dozen different law enforcement agencies on Tuesday resulted in numerous arrests for a drug and gun trafficking ring in Mississippi County, Arkansas.

Some 50 suspects were arrested, while 11 were already in state custody but now have further charges stacked. Another 20 still have warrants out for their arrests, but are now fugitives.

The raid, which was carried out by 574 law enforcement officers, was part of an investigation known as “Operation Blynd Justus,” which aimed to reduce the flow of illegal guns and drugs – and the crime that comes with such activities – in the Arkansas Delta.

The area has seen an increasing growth of gun and drug crimes in recent years, according to a report from a local Fox affiliate. In fact, this was the third major investigation in the county since 2013.

But law enforcement officials are stepping it up and the message they’re sending to criminals is quite clear.

About three-fourths of the suspects are residents of Blytheville, which is located about 65 miles outside of Memphis.

The suspects face a barrage of gun and drug charges, including possession with intent to distribute methamphetamine, distribution of crack cocaine, and use of a firearm in relation to a drug trafficking crime. With the vast majority of the suspects convicted felons, many also face charges for being a felon in possession of a firearm.

Authorities said over the last year, they have set up more than 160 purchases of illegal guns and drugs with the group. The purchases by undercover agents yielded nearly 20 pounds of methamphetamine, more than 10 ounces of crack cocaine and 89 illegally possessed firearms, many of which were determined to be stolen.

Chris Thyer, U.S. Attorney for the Eastern District of Arkansas, said the operation focused primarily on getting “the worst of the worst” off of the streets. David Resch with the FBI said the suspects are violent offenders.

“Today’s operation is a signal to those criminals that the law enforcement community at all levels will find you and stop you,” Thyer said during a press conference. “Our collective goal is to return these communities to their law-abiding citizens.”

And while Thyer said there’s still a great deal of work to be done, Tuesday’s arrests were a huge step toward their goal to bring safety back to the community.

“Our community is worth fighting for, and I believe in Blytheville and Osceola. Cleaning up this community begins with holding people accountable for their actions,” said Scott Ellington, Prosecuting Attorney for the Second Judicial District of Arkansas.

“Today, with the help of the FBI and the Arkansas State Police,” he continued, “We took a big step toward taking back our community from the thugs and criminals who choose to sell drugs and guns, rather than contribute to it in a positive manner.”

The suspects are scheduled to be arraigned Thursday, while those previously in custody will be arraigned later this month.