The controversial right-wing “patriot” group that calls itself the Oath Keepers put both protestors and police on edge while visiting a protest in Ferguson, Missouri, on Tuesday, NBC News reported.

Members of the Oath Keepers wore flak jackets and carried rifles as they walked among the protestors, but St. Louis County Police Chief Jon Belmar told the news outlet that the group’s presence was “both unnecessary and inflammatory.”

As the news trended, the group was heavily active writing statements and aggregating coverage on social media and its website.

“After those said people did some research on us, they are now supporters and future members,” the group wrote on Facebook.

In videos, media and protestors are seen rushing over to snap pictures and record video of interviews with the gun-toting members.

When asked why they were there, responses include references to past riots in the city and others claiming to know little to nothing about why protestors were congregating. 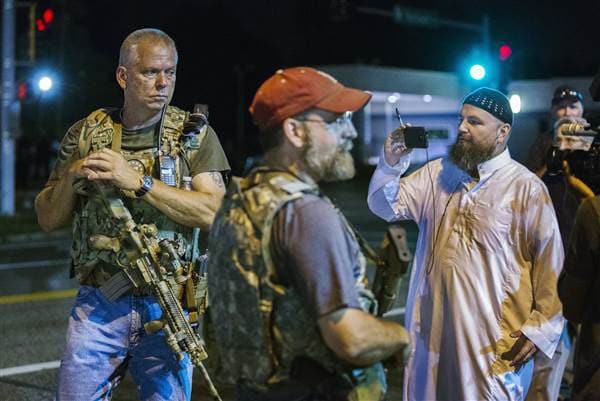 Members of the Oath Keepers walk with their personal weapons on the street during protests in Ferguson, Missouri, on Tuesday. (Photo: Lucas Jackson/Reuters)

The unidentified member who acted as a figurehead for the group was recorded saying they were there to protect contributors for InfoWars, a conspiracy theory (or “alternative media,” as some call it) website, but the group staunchly corrected news reports stating they were hired by InfoWars for protection.

In other videos members were seen discussing with protestors about gun rights, open carry, sales taxes, and politics.

Members of the Oath Keepers – who look to be the very same ones this year – were seen during the winter in Ferguson standing on rooftops in what they called an effort to drive away those who want to do harm to the city.

Protestors started gathering on Aug.9, the one-year anniversary of the death of Michael Brown, a black unarmed teen who was killed by Ferguson policeman Darren Wilson.

Authorities said Brown attacked Wilson and in turn Wilson opened fire. Protestors claimed the shooting was unwarranted, however, the state found little to no evidence that Wilson acted unjustly.

One of the suspects, 18-year-old Tyrone Harris, fired into an unmarked police car at the officers after they confronted him following the initial exchange of gunfire. He was critically injured and brought to a hospital.

The Missouri governor issued a state of emergency earlier this week that was extended through Wednesday.