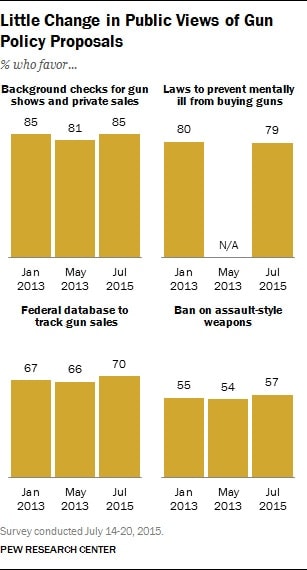 Public opinion for expanding background checks has changed only slightly — with an increase of four percentage points — since Congress failed to advance the measure two years ago, according to a survey published Thursday by the Pew Research Center.

The poll found 85 percent of Americans, including both Democrats and Republicans, favor expanding background checks for gun sales, which had 81 percent support when it was a bill in the U.S. Senate in 2013. Of that 85 percent, 88 percent of Democrats surveyed agreed as did 79 percent of Republicans.

Pew asked 2,002 adults from across the country from July 14 to 20 about their thoughts on gun policies. Of those surveyed, 462 described themselves as Republican, 643 as Democrat, and 796 as Independent. Also, 816 said they had a gun in the house and 1,111 said they had no gun in the house.

There was also bipartisan support favoring laws that prevent people with mental illness from buying guns. Eight-in-10, or 79 percent, of those surveyed agreed with such a measure.

Similarly, according to an Economist/YouGov poll published Monday, 83 percent of gun owners surveyed favored laws that prevent the mentally ill from buying guns.

“While there is broad support for several specific gun policy proposals – and opinion on these measures has not changed significantly since 2013 – the public continues to be more evenly divided in fundamental attitudes about whether it is more important to control gun ownership or to protect the right of Americans to own guns,” Pew said of the findings.

Americans were also divided in their views of the National Rifle Association. Forty percent said they think the NRA has too much influence, 17 percent think too little, and 36 percent said just the right amount of influence.

“This balance of opinion (on the NRA) is virtually unchanged from May 2013,” Pew said.