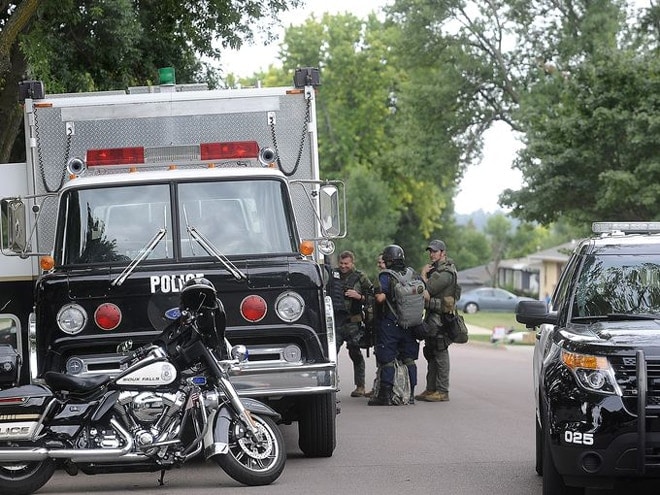 A man who caused a morning of mayhem in Souix Falls, South Dakota, is in custody after authorities tracked him for several hours Thursday.

Police received a call just after 6 a.m. from a homeowner who found Jeremy Jacob Goodshot, 28, trespassing on his property. The homeowner had been awakened by his dog barking, and when he looked outside, he saw Goodshot outside armed with a machete.

The homeowner then grabbed a gun and fired what was supposed to be a warning shot into the ground near Goodshot in an attempt to scare him away. It’s unknown if Goodshot was struck, as the homeowner told authorities he did not hit the man, but according to the Argus Leader, emergency communications later indicated the suspect was suffering from a gunshot wound. Authorities also found a trail of blood behind the man’s house.

Nonetheless, Goodshot fled from the property, but was believed to be in a car accident in which the vehicle flipped over after hitting a bridge. Witnesses at the crash scene described Goodshot as emerging from the vehicle with a gun and telling those present not to call the police, before he again fled from the scene. 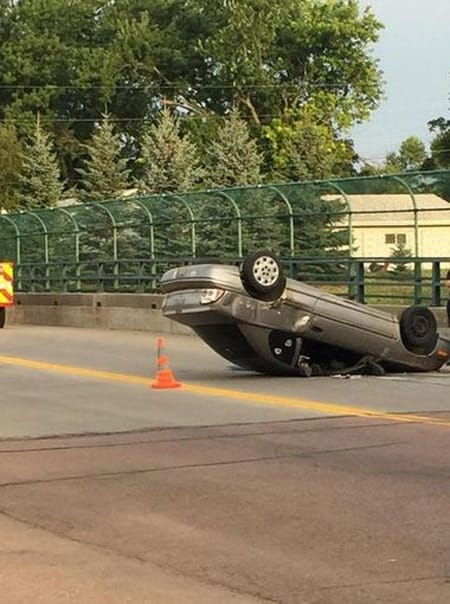 After wrecking his car, Goodshot got out with a gun and told witnesses not to call the police. (Photo: Argus Leader)

After the car accident, local authorities set up a perimeter, then went door to door where Goodshot was last seen, warning residents that he was on the loose and armed.

Goodshot was later found wrapped in a blanket, hiding in Marvin Weiber’s back yard. He was taken into custody without further incident and transported to a local hospital to receive medical treatment.

Weiber said he didn’t know anything about the manhunt and was waiting for someone to come spray his lawn when he noticed the ambulance in his driveway.

Goodshot was charged with aggravated assault, tampering with a motor vehicle and traffic related charges. Authorities said the handgun in Goodshot’s possession has not been found and are urging residents if they find it, not to touch it, but to call the police right away.

“I’m just glad to hear it’s over with,” Marvin said. “I’m glad they caught him.”