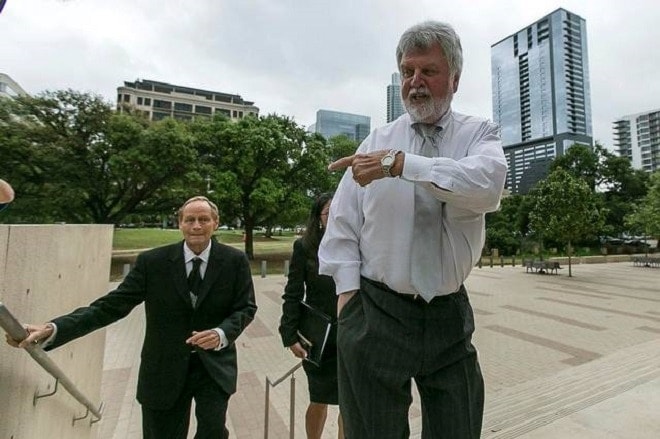 A former county judge was sentenced this week for selling at least 60 guns without a license, some of which ended up being smuggled to Mexico.

The U.S. Attorney’s Office for the Western District of Texas announced Friday that Timothy L. Wright was sentenced to 18 months in federal prison and $15,000 in fines as part of a plea agreement entered in May on charges of dealing in firearms without a license and making false statements to federal agents.

Wright, 70, had been the judge of Williamson County Court at Law # 2 since 2003 and was noted for establishing the county’s drug and DUI court as well as mentoring new attorneys and winning reelection to the bench four times.

As part of a case brought against him, agents from the Bureau of Alcohol, Tobacco, Firearms and Explosives and Homeland Security Investigations discovered that in the last half of 2014 Wright sold scores of firearms without a license including dozens to two individuals who were smuggling the guns south of the border.

Although in itself not illegal to sell personally owned guns, Wright had been warned by ATF agents last September not to engage in the business of selling guns until he obtained a federal firearms license to do so. While Wright did indeed file for an FFL and undergo training in complying with federal regulations, he continued buying and reselling guns while waiting for his license to go through, including making straw gun purchases and lying on ATF Form 4473 about them.

Finally, after receiving his FFL in early 2015, Wright made at least three private sales to felons who were prohibited possessors. This led to a nine-count indictment on the judge issued by a federal grand jury on April 7, which at the time had the prospect of up to 75 years imprisonment if convicted of all charges.

“He sold dozens of firearms without license, many of which went to people smuggling them to Mexico. He falsified official firearms records to hide the true identity of the real buyer and then lied to federal investigators about his crimes. These are serious crimes for which he has been held accountable,” said Durbin.