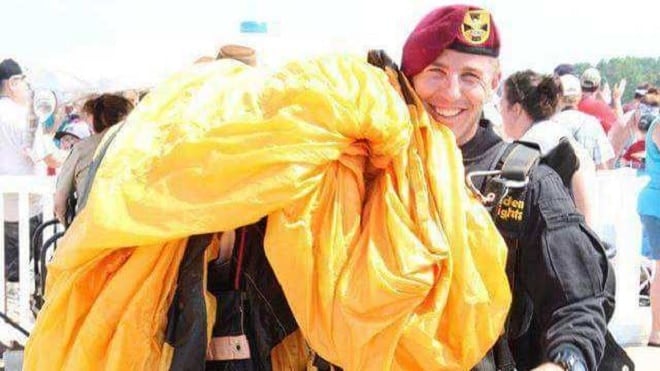 The 32-year-old Hood, a member of the U.S. Army Parachute Team, commonly known as the Golden Knights, had served five tours of duty in Iraq and Afghanistan, earning two Bronze stars. According to the Pentagon, Hood had in excess of 200 free fall and 75 static line jumps under his belt. He had been in the military for 14 years.

Hood was killed following an uncontrolled landing after a mid-air collision with a Navy parachutist during an exhibition as part of the Chicago Air and Water Show.

The Knights, made up of 24 military parachutists drawn from a highly competitive volunteer pool across the Army, perform at up to 240 events around the world and was established in 1961.

Television host and narrator Mike Rowe, who visited the team at their North Carolina training facility last month, called the experience of meeting the Knights, to include Hood, a privilege he’d never forget.

“They’re a team like no other – the tightest and closest I’ve ever seen. I know they’re broken-hearted today, along with Corey’s wife, Lyndsay. But I also know they’re there for each other,” posted Rowe to social media. “I can do nothing but offer all of them my sincerest condolences, and invite you to do the same.”

The Blue Angels and Navy parachute team, the Leap Frogs, expressed their sympathies to Hood and the Golden Knights’ extended family. 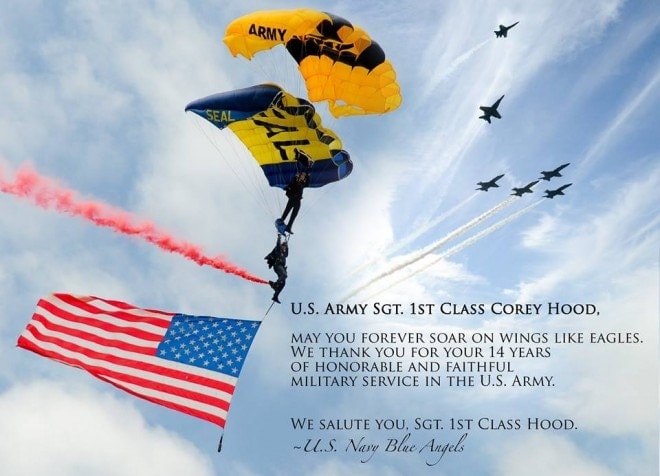