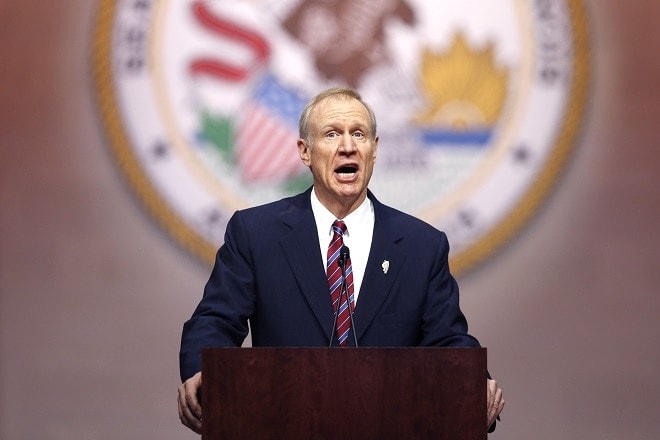 Gov. Bruce Rauner (D) gave his signature last week to a bill establishing statewide guidelines for body camera use by law enforcement, funded by an extra $5 on traffic tickets.

Introduced in February by Democrat Sen. Kwame Raoul, the proposal passed the Senate 45-5 and the House by a vote of 107-7 with the support of police lobby groups.

The comprehensive new law, which sets standards for the use of worn camera devices, limits controversial control techniques such as chokeholds and mandates extra racial sensitivity training, was hailed as a first for the country.

“Today we are taking steps to strengthen the relationship between our law enforcement officers and the public they protect with the Police and Community Improvement Act,” Rauner said in a released statement. “As a society, we must ensure the safety of both the public and law enforcement. SB 1304 establishes new and important guidelines and training for police departments and their officers, while protecting the public by prohibiting officers from using excessive force.”

The new law establishes minimum standards for body cameras worn by police in Illinois. These include having the cameras turned on when the officer is on duty and responding to any activity, and granting the discretion to turn them off at the request of a victim or confidential informant.

Officers are allowed to review any footage prior to making reports or statements but must note they did so in the narrative and agencies must store the recordings for at least 90 days. Further, the recordings are to be exempt from most Freedom of Information Act requests.

The use of cameras will be funded through a grant program to assist agencies with equipment and maintenance. A $5 fee added to moving violations that result in convictions will offset the expenditure.

In addition to the body cameras, the new law mandates an independent review of all officer-involved deaths, requires agencies to report the number of officer-involved shootings and arrest related deaths each month, and refines the structure of training to be delivered on topics to include cultural competency, implicit bias, and the proper use of force.

Finally, it defines what constitutes a chokehold under Illinois law and restricts its use to deadly-force encounters.

Lawmakers contend the increased use of body cameras will increase public trust in law enforcement.