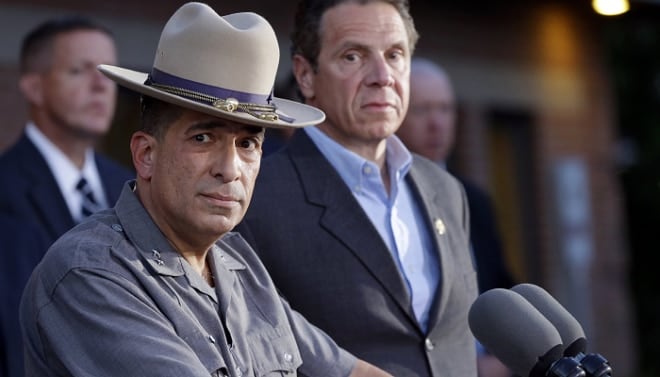 A number of New York residents backed by a county Libertarian party have filed suit against Gov. Andrew Cuomo and others over the state’s restrictive handgun permitting rules.

Named as plaintiffs in the case are the Libertarian Party of Erie County as well as seven local residents who claim to have been denied access to firearms due to New York’s Sullivan Act. The law, one of the first gun control statutes in the nation, dates back to 1911 and requires anyone desiring a firearm small enough to be concealed to obtain a permit.

However, permits in some cases can be elusive, as one plaintiff, Edward Garrett, can attest to after waiting three years without success.

“Whatever happened to the words ‘shall not be infringed?’” Garrett asked The Buffalo News.

The suit by Garrett and other area Libertarians was filed last month in the U.S. District Court for the Western District of New York and name Cuomo, state Attorney Gen. Eric Schneiderman and State Police Superintendent Joseph D’Amico in their official capacity as defendants.

In their 17-page complaint the plaintiffs argue there are a number of unconstitutional roadblocks to obtaining a pistol permit in the Empire State.

“The permit process involves a massive invasion of privacy, forcing the applicant to identify his or her closest friends who are then subjected to a criminal record check themselves,” reads the complaint. “The permit process can be expensive, thus preventing many low-income persons from applying for a permit. The permit process can also be time-consuming, constituting a burden not imposed for the exercise of numerous other fundamental constitutional rights.”

James Ostrowski, a Buffalo attorney, is representing the Libertarians, and mentioned past gun control schemes in countries such as Cambodia under the Khmer Rouge, the Soviet Union and Nazi Germany, citing that in each case the mass confiscation of firearms were “signposts of incipient tyrannical government,” and that while the U.S. has not reached comparative levels, strict gun control laws such as the Sullivan Act are an assault on liberty.

Gun control advocates do not agree, contending the state’s pistol permitting laws have withstood legal assault for more than a century.

“The Libertarian Party lawsuit is nothing but a rehashing of old and tired arguments that have been long settled by the courts,” said Leah Gunn Barrett, executive director of New Yorkers Against Gun Violence. “The Supreme Court has consistently held that gun regulations are compatible with the Second Amendment.”