The Josephine County District Attorney announced Aug. 11 that no charges would be filed against an Oregon father who shot and killed a man trying to break into his Grants Pass home last month.

Police received a call from Jeanine Buckman around 10:15 p.m. on July 14, according to reports from local media. Buckman told the dispatcher there was a man attempting to get inside the house, banging on the doors and windows, including the bedroom window where the couple’s children were sleeping.

While Buckman was on the phone with the 911 dispatcher, her husband, Charles, was moving through the house checking to make sure all the windows and doors were secure. Jeanine said he was walking through the home with the lights off, as not to let the prowler see him. Jeanine also informed authorities that her husband was armed with a Smith & Wesson .40-caliber handgun.

Charles described the man outside as having a “crazy” or “ranting” voice, and later told police that he felt his family was being “hunted” as the man made his way around the home outside.

About five minutes into the 911 call, the suspect, who was later identified as 32-year-old Matthew Durbin, began throwing his body up against the side of the sliding glass door. At that point, fearing the man would get inside, Charles fired two shots through the glass door and struck Durbin in the left hand and chest.

Durbin then ran through the yard towards the children’s room, so Charles – fearing the man was going back to where his children were – followed him and fired another six shots, striking Durbin three additional times in the torso and once in the leg. Durbin fell to the ground and several minutes later – eight minutes after the 911 call was placed – police arrived on the scene. 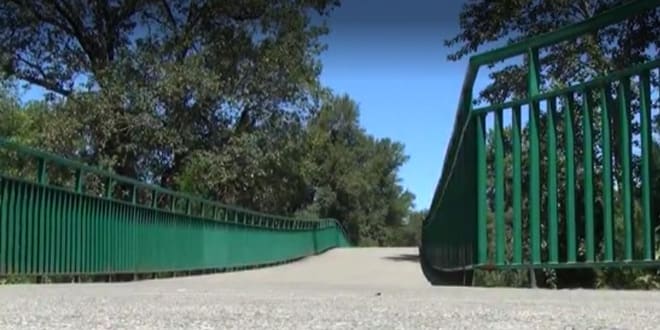 Cyclists said they believe the trail to be generally safe, but those who live nearby said transients in the area have been a problem. (Photo: KDRV)

Durbin, who was a transient living in his car, was pronounced dead.

Authorities do not know what triggered Durbin’s actions, but did confirm that he had prior convictions for methamphetamine. No drugs were found to be in his possession, but a toxicology report has not yet been received by the District Attorney’s office.

Nonetheless, the DA believed Buckman was acting in defense of himself and his family, but also stressed that justification of deadly force is determined on a case-by-case basis, the Mail Tribune reported.

“We’re looking at it from the perception of the victim at the time,” explained Chief Deputy District Attorney Lisa Turner. “What they were faced with at the time they made the decision (to use deadly force).”

The Buckmans, who live next to a somewhat secluded bike trail, said they as well as their neighbors have had problems with transients on their property in the past.