'Route 29 Batman' killed on roadside after 'Batmobile' breaks down (VIDEO) 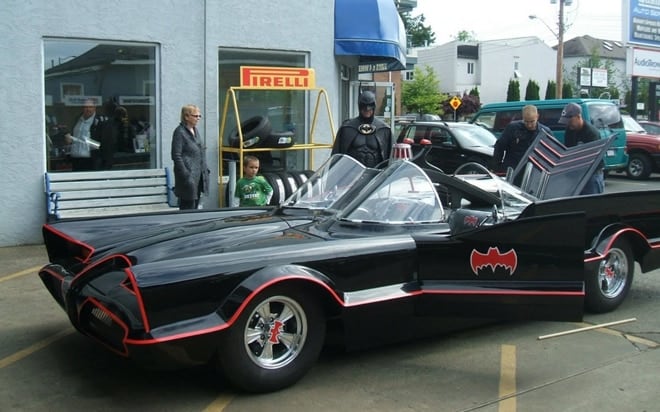 A 51-year-old Maryland man known as the “Route 29 Batman” was killed in a tragic accident Sunday night after pulling over to the side of the road with car trouble.

Lenny Robinson made his Wayne family-sized fortune by working day and night building up a commercial cleaning business. But Robinson used the money to buy an elaborate Batman costume and a matching custom-made Batmobile and went to local hospitals to visit sick kids.

“These visits provide an immediate boost for these kids,” Jeffrey Dome, the oncology division chief at Children’s National Medical Center in Northwest Washington, said back in 2012 after Robinson’s fame started to grow. “Some of these children have to stay for weeks or months at a time. … A visit from a superhero is sort of like a fantasy in the middle of all this hard-core therapy.”

Robinson also spent some $25,000 annually to keep his Batmobile well-stocked with toys and other goodies for the kids he visited, as well as the random kids on the street who gawked at the car and the man – the Batman – driving it.

Robinson was doing the gig since 2001, but became an internet sensation in 2012 after being pulled over by the Montgomery County police on Route 29 after he had switched out the license plate on his black Lamborghini for a much cooler, kid-friendly Batman plate. The encounter, including the moment Robinson stepped out of the black Lamborghini in full Batman costume, was captured on the officer’s dash cam and instantly became an internet hit.

But Sunday night, after stopping off at a gas station – and handing out some Batman-themed goodies to wide-eyed kids admiring his Batmobile – Robinson started down the interstate, only to have engine trouble. Robinson pulled to the side of the road, still partially in the fast lane, to investigate the problem.

The family he had just encountered at the gas station saw him on the side of the street and pulled over behind him and turned on their emergency flashers to see if they could be of assistance. Minutes later, a Toyota Camry slammed into the custom car, pushing it onto Robinson, who died at the scene.

“He touched a lot of lives and made a lot of kids smile,” said Robinson’s brother, Scott. “That’s all he wanted to do.”

Robinson said in a 2012 interview that his idea for the costume first came from his son, Brandon’s, obsession with the caped crusader, but once he saw how children reacted to it, Robinson’s life took a turn to a different direction.

A previous version of this article incorrectly stated Robinson was driving his Lamborghini when the accident occurred, when in fact he was driving his replica Batmobile.