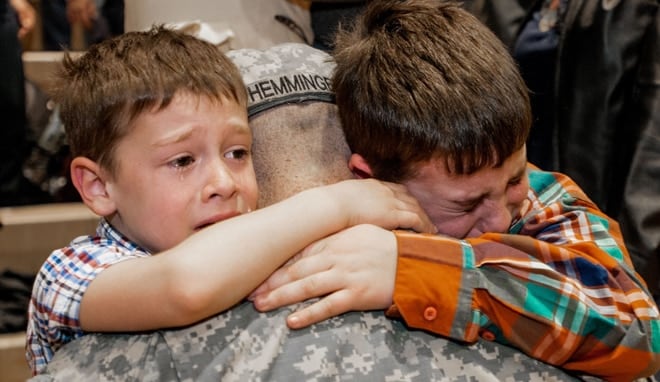 A new study published Monday in the Journal of the American Medical Association Pediatrics found that children with one or both parents in the military are at greater risk for being bullied and engaging in violent and self-destructive behaviors.

The study’s principal researcher, Professor Ron Avi Astor of the University of Southern California’s social work department, said his interest in studying the behaviors of children with parents in the military piqued when he learned of the harassment they often face at school.

“I really do think of them as an invisible diversity group,” Astor said.

The study, “Substance Abuse and Other Adverse Outcomes for Military-Connected Youth in California,” looked at the answers given by over 630,000 middle and high school students in California during an annual state-administered survey that covered nearly every school district in the state. The survey included questions about drug use, violence, bullying and bringing weapons – including guns – to school.

More than 54,000 of the students participating in the survey identified themselves as military kids, but according to the study, California is one of only 14 states administering the survey that note whether parents of students are in the military and even less make note of actual veteran status, thus making data for these types of studies somewhat difficult to obtain.

Nonetheless, researchers found that military children were 73 percent more prone to report recent as well as lifetime substance abuse than their non-military associated peers. Students admitted to not only smoking cigarettes more often, but also using alcohol, marijuana and “other drugs,” such as cocaine, crack, methamphetamine and LSD. Military-connected students also admitted to higher rates of using inhalants as well as abusing prescription medications more often.

Astor points to common factors such as frequent moves, concern over safety of family members and separation from parents as triggers for the behavior.

“We have kids whose parents have had 13, 14 deployments, both the mom and the dad, and it seems like there’s almost no end in sight,” Astor explained. “We have some cases where kids have been in six, seven, eight, in some cases 20 schools, going from base to base, country to country.”

But with increasing interest, Astor hopes by studying the kids’ behavior, it will help to show the importance of providing resources to at-risk military children and get them any help they may need early on.

“They’re a population to watch for a lot of reasons, both in terms of resilience science, but in terms of being able to get them early intervention as quickly as possible,” agreed Anita Chandra, a senior policy researcher at Rand Corporation, which challenges public policies through research.