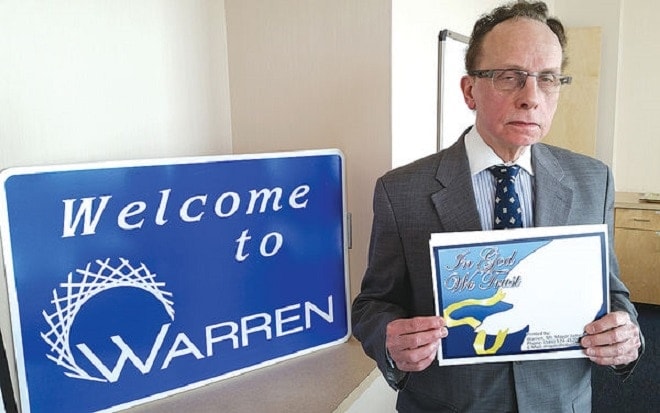 Although not precipitated by an outbreak of flamethrower-related crime, city leaders in Warren are moving to ban the devices for all but law enforcement and other official users.

A proposed ordinance drawn up by the City Attorney’s office prohibiting the storage, use and possession of flamethrowers inside the city limits, to be updated with input from the fire department, was submitted to the Aug. 11 council meeting for review. The mayor, a Republican, says the new law is needed to avoid future problems.

“I’m very concerned about it. It’s very dangerous in a lot of situations,” Mayor Jim Fouts told the Detroit Free Press, citing the devices could cause fires, property damage and even death. “The pain and death it could impose is overwhelming.”

The proposed ordinance, approved by Fouts, City Attorney Mary Michaels, and Fire Commissioner Wilburt McAdams, defines flamethrowers as transportable devices that emit a burning stream of combustible or flammable liquid and aims to restrict them due to a, “significant risk of starting fires, damaging property and/or causing injury.”

Those found guilty of possessing or using such a flame weapon would be liable for a $500 fine and up to 90 days in jail.

Exempted from the ordinance are open-flame cooking devices, paint torches and outdoor patio heaters as well as any device used by federal, state or local law enforcement or fire department.

Although Warren’s crime rate and other factors earned it a top 10 spot in Forbes‘s 2012 list of America’s Most Miserable Cities, city officials haven’t cited any past use of flamethrowers in commission of a crime in the area or complaints as reason to move towards a ban. Nonetheless, the Mayor feels the prohibition is warranted.

“You know something like this will be used by bad people for bad things,” Fouts said.

“It’s how a product is used that determines punishment for the operator,” said Chris Byars, CEO and project lead at Ion Productions Team, the Detroit company that makes the XM42 flamethrower. “Simply owning a particular product should not be a punishable offense. It’s a matter of education and respect for safety.”

The XM42 project, which bills itself as the world’s first commercial flamethrower, earlier this year raised $50,000 overnight through crowd funding to begin production and is among the front runners in a move to make the devices more obtainable.

Though regulation is sparse, most flame devices with the exception of agricultural equipment are extremely expensive collectibles. New devices, which still have legitimate uses for clearing out unwanted brush or inciting controlled burns to keep larger fires from spreading, can run as low as $700.

City Council members brought up exemptions for cigar lighters and hand torches in their meeting this week, and have reportedly put the issue on the back burner for now.