LaserLyte Lyte Ryder modular laser sights are leaving the factory on their way to stores near you and online. The fresh design uses a single pointer unit with different outer shells to fit on pistols with short or long accessory rails.

Its interchangeable outer bodies make the Lyte Ryder out-of-the-box compatible with a wide swath of the service and concealed-carry pistol market, to the point where LaserLyte is calling the most universal-fit laser sight to-date.

With the Lyte Rider it’s possible to shell out for one laser sight and move it around. A lot of people have different everyday carry setups that vary from season to season and it’s nice to have the option of being able to upgrade or replace a carry gun and not have to buy another laser sight for it. 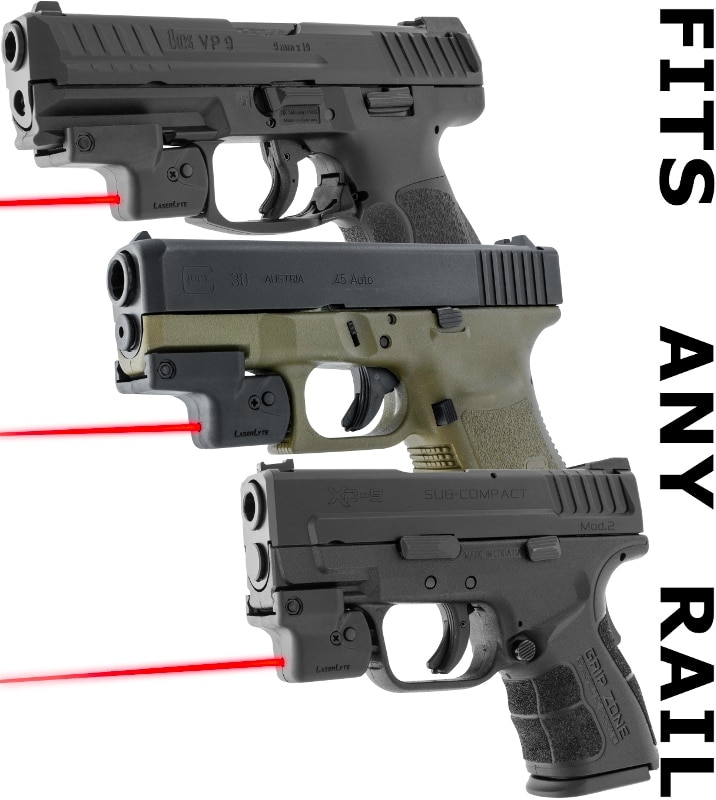 Great for anyone with multiple or seasonal everyday carry setups. (Photo: LaserLyte)

It’s an ambidextrous laser sight with controls on both sides and has two modes, constant-on and pulse. It uses a Class IIIA 650nm red light laser with an average run time of 5 hours, or 10 in pulse mode. It’s powered by three 392 button cells and does not need to be removed to install fresh batteries.

To conserve power it has an auto-off function and will turn itself off after six minutes of use and it adds less than an ounce of weight to its host pistol. At 1.08 inches wide it’s barely wider than the thinnest of single-stack pistols and its snag-free lines ensure fast, safe unholstering.

The Lyte Ryder comes with two bodies, short and long, and all the tools needed to install and if necessary, adjust the windage and elevation. Only a Phillips screwdriver is needed to change the bodies and the swap is simple and only takes a minute or two.

To change bodies users must remove one screw and take the inner laser module and left- and right-side power buttons and install them in the other body. After putting it back together inside the new body it installs using the same single mounting screw.

The cost of red light lasers has come down in recent years and the Lyte Ryder is no exception. With an MSRP of $109 the laser sight is already listing for around $90. The Lyte Ryder is offered in two models, with user’s choice of black or tan polymer shells.