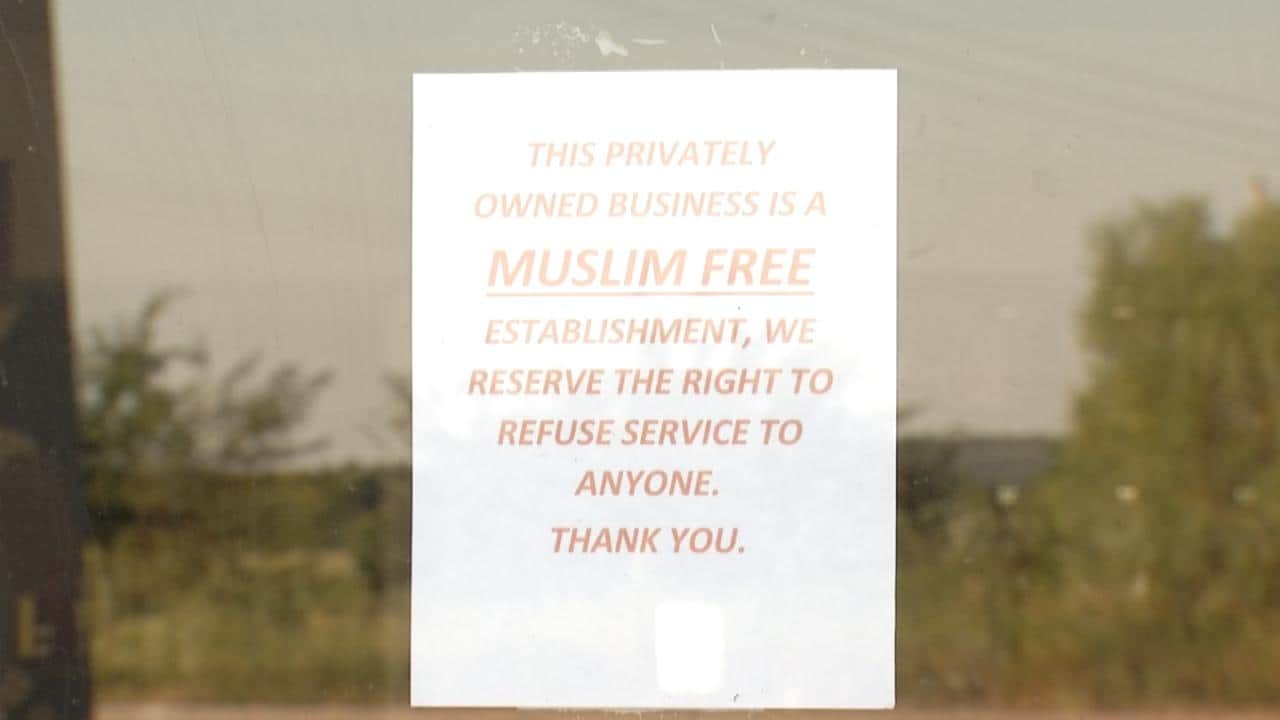 The Save Yourself Survival and Tactical Gear store in Oktaha, Oklahoma, hung a sign declaring the establishment Muslim free. (Photo: Muskogee Now)

An Oklahoma man accidentally shot himself Tuesday after dropping his firearm in the same gun shop being guarded by armed citizens after it received threats for declaring itself a Muslim-free business.

The unidentified man was inside the Save Yourself Survival and Tactical Gear store in Oktaha when he dropped his .45 Colt revolver, which discharged and shot him in the right arm, according to multiple reports.

A post on the gun store’s Facebook page said the man was a close friend to the owner and wasn’t a guard or customer, but came over to help fix a door in the shop’s office.

As the man bent over, his gun fell out of his holster, hit the floor and “went off,” the post claims.

Sheriff Charles Pearson on Monday told News On 6 the guard group decided to protect the gun shop in light of recent threats made after the business hung a sign in its window saying it would refuse service to Muslims.

“I saw several of those gentlemen out there yesterday,” Pearson told Muskogee Now. “The way they were holding their weapons, with the fingers on the triggers, you can tell a couple of these gentlemen have no idea about weapons safety. It’s like the Clampetts have come to town.”

The sheriff cautioned the group not take the the law into their own hands if an attack were to be carried out against the declared ’Muslim-free’ business.

In an earlier Facebook post, the shop said it supported Jan Morgan, the owner of an Arkansas gun store and range that  similarly sought to ban Muslims and was later monitored by the Justice Department for potential violations of federal law prohibiting such racial and religious discrimination.

A Riverside, California, man who drove more than 1,400 miles to protest the gun shop’s ban on Muslims was met by one rifle-toting veteran who claimed he wasn’t there to protect the store from Muslims, but from violence in general.

“I am a combat veteran,” said the man, who identified himself as “Eagle One.” “I will fight to the death for someone’s right to practice whatever religion they want to. I’m not here because of that. I’m here because when people start resorting to violence, we can’t allow that.”

Chris Martin, 49, a veteran himself, made the long trip with other protesters after he heard about the store’s policy.

“I just wanted to come here and express my disapproval” of the store’s sign proclaiming it a Muslim-free zone, he said. “I’m a veteran, I fought for that right.”

The gun store claims to be part of a constitutional militia in Oklahoma and offers customers supplies for survival in the wake of “natural and manmade disaster,” according to its website.

Eagle One didn’t want to give his real name for fear of threats against his family, he told Muskogee Now.

“Don’t paint us as ignorant hillbillies,” he said. “We just believe in people’s constitutional rights, and we’re here to make sure they get them.” 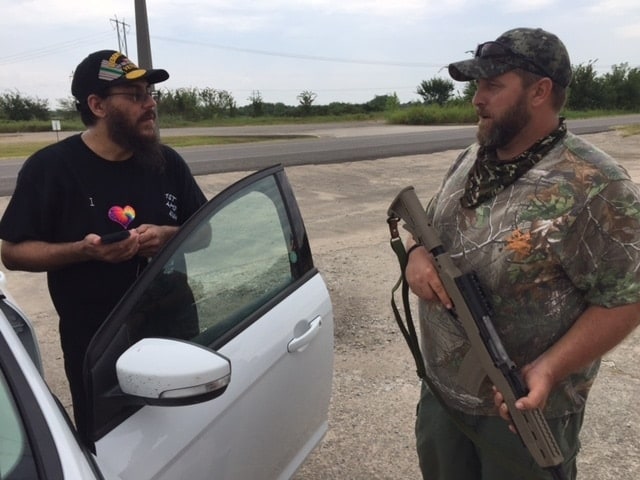 Navy veteran Chris Martin (left), 49, converted to Islam while serving in the military. He spoke with one of the armed citizens, “Eagle One,” who was guarding the Oklahoma gun shop declared Muslim-free. (Photo: Muskogee Now)