The family of the hostage killed in the shootout filed a civil lawsuit Tuesday against the city of Stockton, claiming that the police department’s response was excessive. (Photo: Craig Sanders / Associated Press)

A report released Monday by The Police Foundation, a Washington, D.C.-based research group, indicated that the use of more than 600 rounds by officers with the Stockton Police Department while responding to an armed robbery and hostage situation last year was both excessive and unnecessary.

The incident occurred on July 16, 2014, started at a Bank of the West and ended more than 60 miles away following a high speed pursuit and rolling gunfight. After robbing the bank, the three suspects took three hostages and fled the scene in an SUV. During the pursuit, which stretched over three counties and topped speeds of 120 miles per hour, the suspects fired multiple rounds at officers, disabling more than a dozen law enforcement vehicles in the process.

During the chase, two of the hostages were either pushed or jumped from the vehicle and survived, but the third hostage, Misty Holt-Singh, remained in the SUV with the suspects during the exchange of gunfire, which ultimately claimed her life. 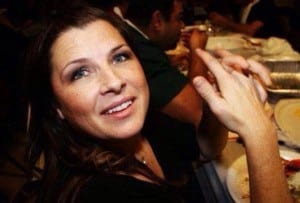 Misty Holt-Singh, 41, ran into the bank to grab some cash for a haircut with her 12-year-old daughter when she was taken hostage. (Photo: Facebook)

In the end, a lone suspect survived, and an investigation revealed that over 600 rounds had been fired by more than 30 police officers, and 10 of those shots fatally struck Holt-Singh.

Authorities maintained the massive use of force was necessary to save lives, noting that backing away or allowing the suspects the chance to take additional hostages were not options.

The detailed and sobering 60-page report came at the request of Stockton Police Chief Eric Jones.

“We said we’ll accept responsibility, and that’s what I’m doing here today,” Jones said during a news conference Monday. “There’s not a man or woman in the Stockton Police Department that does not wish it had a different outcome.”

The report referred to the incident as a “sentinel” event and a “law enforcement nightmare,” similar to the infamous 1997 North Hollywood bank robbery and shootout, which will likely change future policies and training.

“In reviewing dispatch tapes and in response to interviews, the review team determined there was no planned response for when the suspect vehicle stopped,” the report noted. “This lack of planning, along with the number of officers involved, created a level of chaos that was difficult to manage and overcome.” Jaime Ramos is the lone surviving suspect and now faces a myriad of charges, including murder. (Photo: Stockton Police Department)

However, Jones said the chaos was created not by the officers, but the armed assailants.

Nonetheless, the report also noted it was impossible to determine how many officers should have been involved in the shootout, but point out there were no designated shooters and that some officers even engaged in “sympathetic fire,” essentially firing their weapons for no reason other than their colleagues were doing the same. The report pointed to the lack of safety in many instances.

“We asked the Police Foundation for a thorough and unsparing review, and that’s what they have delivered,” Jones concluded. “There are elements of this report that are tough for us to read, but it’s important that we be as brave in reviewing this incident as our officers were in responding to it.”