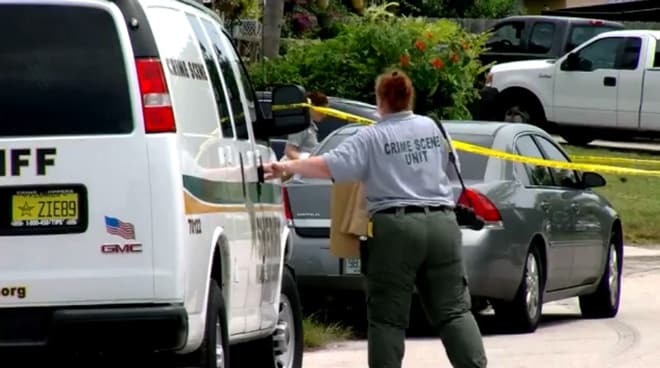 Residents said the neighborhood is normally quiet and they all tend to look out for each other. (Photo: Sun Sentinel)

A Florida man returning to his Lantana home last week opened fire on two intruders he found inside, killing one and seriously injuring the other. Now the surviving suspect is charged with murder for the death of his accomplice.

Juan Pablo Flores, 27, came home around 8:30 p.m. on Aug. 13 and noticed there were lights on inside the house when there should not have been, the Palm Beach Post reported. So Flores, who was armed, told his girlfriend to stay in the car as he walked toward the home. Once inside, he discovered his two dogs had been killed.

Flores then came face to face with Tavarress Alexander Wilson and Obrian Simms, who were in the middle of burglarizing his home. According to the homeowner, one of the suspects aimed an assault rifle at him, but Flores fired first, striking both suspects. Flores then ran out the front door and later told police he could hear shots being fired as he ran.

Wilson, who was shot in the face, fled from the scene. A neighbor told authorities after the shots were fired, she saw a black man running through the back yards in the neighborhood and he was bleeding from his face.

About half an hour later, Wilson showed up at a local hospital seeking treatment for the gunshot wound. Meanwhile back at the scene of the shooting, Simms was pronounced dead, and Flores was uninjured.

Initially, Wilson was uncooperative with authorities, gave them a fake name and refused to give information concerning how he came to be injured. But trails of blood in and around Flores’ home and a SNA analysis helped investigators to determine that he was the suspect involved in the home invasion and thereby shot by Flores.

Wilson, who previously served six years in prison for armed robbery and carjacking, now faces charges for second-degree murder for his part in Simms’ death and is being held without bond. In Florida, as in most states, a suspect can be charged with murder if the death of an accomplice occurs while the suspects are involved in the commission of a felony, regardless of how the suspect is killed.

The incident remains under investigation and authorities say they do not believe it was a random act.

Flores’ neighbor, Brittany Shrine, told the Sun Sentinel that he remains rather shaken up over the incident and does not know why he would have been targeted. Still, she thinks he acted appropriately.

“I don’t what I would do if I walked in my house and found two people in my house that didn’t belong there,” Shrine said, “especially being a parent, as he is.”

Mike Inman, whose grandmother lives a few doors down, said many people in the area carry guns for protection and added that if he was placed in the same position as Flores, who he described as a friendly father of two, he would have reacted the same way.

It is unknown if Flores’ children were with him at the time of the shooting.