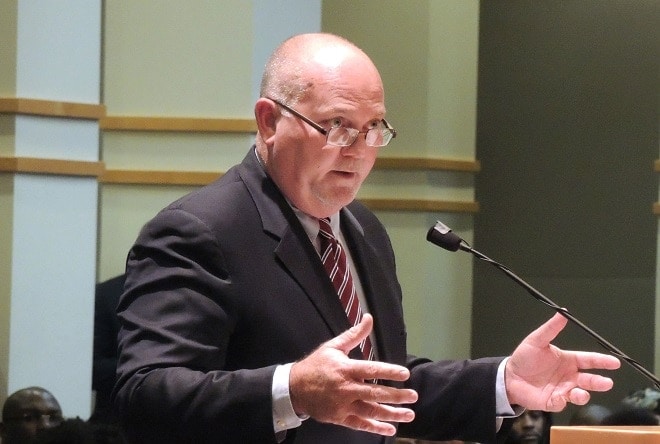 A House Republican has filed a bill that could lead to first-degree misdemeanor charges for some with illegal backyard gun ranges.

The measure, which would make it a crime to shoot recreationally on residential property of less than an acre, is the latest salvo by lawmakers in an attempt to stamp out controversial private gun ranges in the Sunshine State. It was filed for the 2016 session earlier this month.

“Basically, it just prevents gun ranges or recreational target shooting in residential property that has a density of one unit per acre or greater,” said bill sponsor Rep. Neil Combee, R-Polk City. “So, if you had a subdivision – a quarter acre, third acre, half acre, one acre subdivision – you would not be allowed to have a target range at your home.”

Combee’s proposal, HB 41, aims to prohibit the outdoor discharge of firearms in some residential areas if the activity takes place on property with a density of one or more dwellings per acre. Those charged could face a first-degree misdemeanor punishable by up to one year in county jail and up to a $1,000 fine.

The measure contains exemptions in the case of defensive gun use.

Combee’s legislation is the most recent installment in the attempted regulation of ranges set up by Floridians in residential areas. First publicized last year with a range in the Keys that went on to garner national attention on the Colbert Report, proposed laws against such ranges was introduced after a St. Petersburg man built a backstop berm in his backyard.

While the St. Pete range was never used and was torn down by its owner after public outcry and even death threats, the bill to increase regulation stumbled with lawmakers citing the problems the measure was trying to address could be handled under current law.

According to Combee, the new bill has the initial backing of the National Rifle Association and law enforcement lobby groups.

“When we’re dealing with firearms and people shooting in densely populated areas, even one incident could be tragedy,” said Amy Mercer, executive director of the Florida Police Chiefs Association. “And, that’s why we felt it’s important. I know over the past year, we had heard of a few different incidences throughout the state. And, like I said, even one incident that resulted in the loss of life would be too many.”