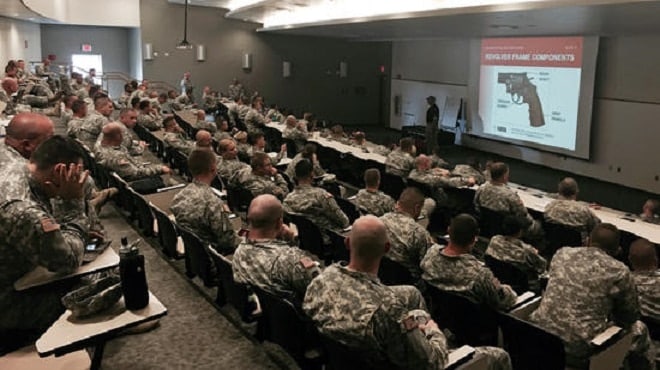 Following a domestic terror attack on Navy and Marine personnel in Chattanooga  last month that left four service members dead, a cascade of state governors authorized increased security for national guard members under their jurisdiction to include, in some cases, the carry of weapons.

Pence moved forward with a plan to allow Indiana Army and Air National Guard Members to carry personal concealed weapons provided they had a valid permit and received training.

“Quite simply, I will not allow our citizen soldiers to remain unable to defend themselves and our citizens at facilities around the state,” Pence said in July. “Those who serve in the Indiana Army and Air National Guard, and their families, make great sacrifices for the people of Indiana. They deserve nothing less than our best efforts to see to their safety and security, and that is the very foundation of my decision.”

However, after the NRA stepped in to provide free certified instructors, some felt it was partisan politics at play.

“There is no institution better equipped to train our servicemen and women than the US military itself,” Dan Gross, the Brady Campaign’s president, told the Associated Press. “This is not a job for lobbyists.”

The AP conducted a survey of 14 states and found four, Indiana, Arkansas, Florida, Kentucky and Oklahoma that allow guardsmen to carry concealed weapons – though only the first involves NRA training.

The story, published Friday, was soon repeated on social media by The Trace, a left-leaning journalism start up backed by Michael Bloomberg, citing Indiana as the only state allowing the practice without qualifying the statement with the fact the AP only surveyed less than a third of the states nationwide.

The post elicited comments such as, “You got the NRA terrorist cult to train really they can’t even train their members,” and, “Why do we let the NRA control our lives.”

Lost in translation is the fact that the NRA’s labyrinthine organization contains several wings such as the Institute for Legislative Action, which does get very involved in politics, as well as separate safety, hunting and training branches

The NRA Training Department has a network of some 97,000 instructors and range safety officers across the nation offering classes in multiple disciplines. Further, many uniformed and contract military small arms instructors attend NRA Law Enforcement Firearm Instructor schools for the purpose of instructing investigative and security personnel.

In past years, NRA training counselors have even helped train the Marine Corps Combat Shooting Team.

What is further being lost in the gun politics is the fact that Pence’s initiative for NRA instructors to provide training for state guardsmen with civilian concealed handgun licenses goes past Indiana’s current practice, which does not mandate any training for those with carry permits – unlike all the surrounding states.

In neighboring Illinois, who has among the most extensive requirements for a concealed handgun license in the nation, the state police require firearms instructors to have certification from an entity, “such as the National Rifle Association of America.”

Likewise, Indiana’s neighbor to the east, Ohio, will only grant a concealed carry permit to candidates who have completed a course delivered by either an NRA or Ohio Peace Officer Training Commission certified instructor.

The Indiana National Guard has 14,160 members in 65 installations around the state.