Arrests made at Pokemon tournment over alleged threats, guns 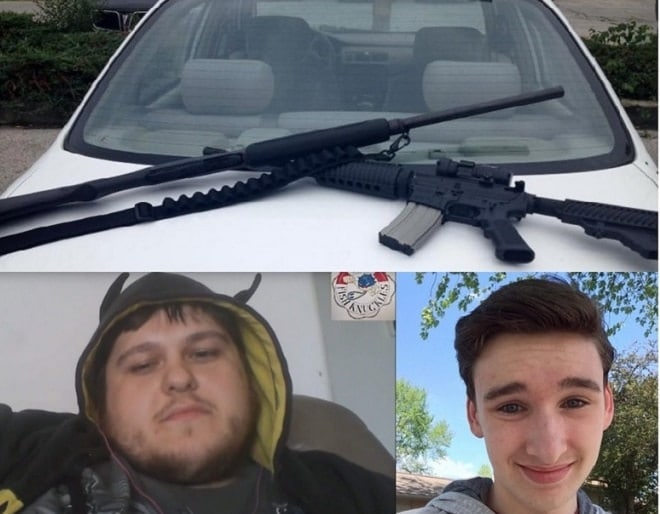 James Austin Stumbo, left, and Kevin Norton were arrested for driving to Massachusetts from Iowa with guns not registered in the Commonwealth, following questionable statements on social media (Photo: Facebook composite)

Boston Police foiled a “potential tragedy” when they took two Iowa men into custody with unregistered guns in their car at an area hotel last weekend.

According to a statement from the Boston Police Department, the two men were identified through a tip from private security at the Hynes Convention Center, site of the ongoing 2015 Pokemon World Championships, which had some 1,000 estimated attendees.

Working with the Saugus Police Department, who had jurisdiction over the hotel Stumbo and Norton were booked, authorities carried out a search warrant Friday and found two firearms, a hunting knife and ammunition in a Geo Prizm tied to the Iowa men.

Inside the vehicle, police recovered a 12-gauge Remington shotgun, a DPMS AR-15 rifle, and several hundred rounds of ammunition, which led to the arrest of the men and seizure of the vehicle and the weapons. Stumbo had previously posted an image of the guns and car to Facebook.

Boston Police characterized the take down of the Pokemon subjects as a win for counter-terrorism.

“The relationship between police and private sector security is important in both our community policing philosophy, as well as our counter-terrorism strategy, said BPD Bureau of Intelligence and Analysis Commander Superintendent Paul Fitzgerald in a statement. “This incident is a good example of private security reaching out to their local Boston police district and relaying information to detectives and BRIC analysts in order to identify the very real threat. The BPD detectives and collaborating agencies did a great job in the stop and prevention of a potential tragedy.”

The Pokemon Company International acknowledged the incident late Sunday on the championship’s final day and noted in a statement that they take “the safety of our fans seriously and will continue to ensure proper security measures are a priority.”

Stumbo and Norton will be arraigned in Boston Municipal Court.