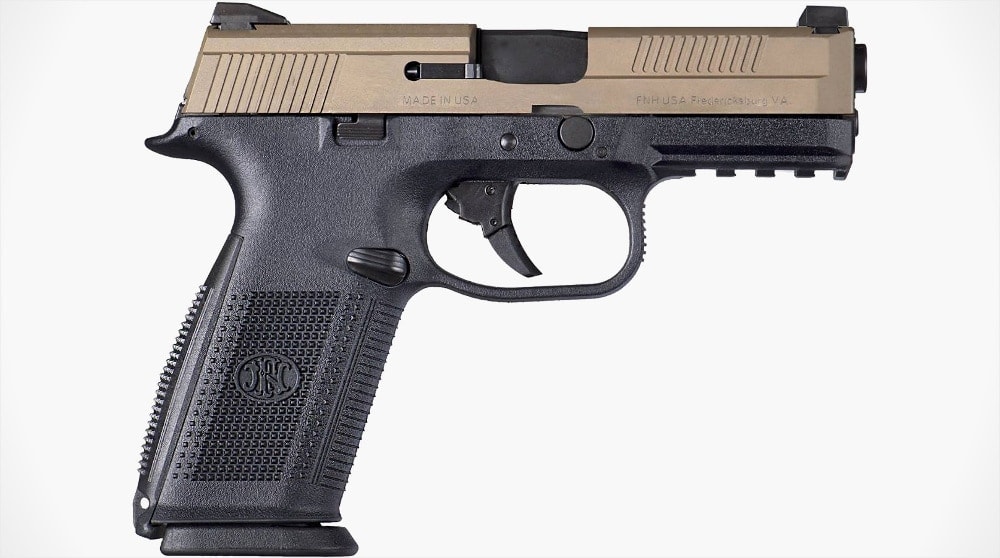 FNH USA has is announcing a limited edition run of two-tone 9mm Luger FNS pistols with black frames and flat dark earth slides. The FNS is the company’s flagship service pistol with a very modern set of features including fully-ambidextrous controls.

“We are excited to release this new, exclusive pistol to FNH USA customers,” said senior vice president Ken Pfau. “FNH USA strives to manufacture the highest quality products that continue to expand our product line while offering our customers the variety and options they desire.”

It is a limited run of only 500 pistols distributed through the United Sporting Companies. The FDE FNS is built on their matte black frame without a manual thumb safety with their 4-inch barrel and slide assembly.

Like the standard service pistols they have a 17+1 capacity and a dry weight of 25 ounces. The slides are stainless steel with a PVD or physical vapor deposition finish, which is one of the toughest available today. These may be a limited edition but that doesn’t mean they have to be safe queens.

Underneath they’re the same FNS pistols that have been widely-praised by shooters everywhere, since its release it has quickly become a popular handgun for self-defense, duty and competition shooting. The FNS is a true ambidextrous pistol with dual magazine release buttons and slide catch levers.

The limited edition FDE model has a suggested price of $599, in-line with the rest of the FNS series. It may still command a price premium for its exclusive status, though, and buyers might want to prepare to pay up to full price for these guns.

Right now FNH USA is running a series of promotions as a part of their Get Out and Shoot campaign. There’s one week left in their first promotion giving away range bags and interactive steel targets to handgun and rifle purchasers – sadly, the promo doesn’t apply to limited-edition flat dark earth pistols. But it is worth up to $200 in range equipment so they can be forgiven.

FNH USA is running an extended PS90 promo that runs through Sept. 30. If you buy a PS90 FN5.7x28mm carbine between now and then, FNH USA will send you five free magazines for it with a retail value of $141.

The promo gets you three 50-round magazines and two 30-rounders. These reduced-capacity magazines are lighter loaded and can keep you from burning through a lot of ammo at the range but most people are going to want to convert them to 50-round magazines, which can be done with a simple parts swap, right now, for less than $10 per mag.

The PS90 is a blowback carbine based on the famous P90, one of the first compact personal defense weapons to see a lot of success. If you were thinking about picking up a PS90 this summer now’s a great time while this promo continues.