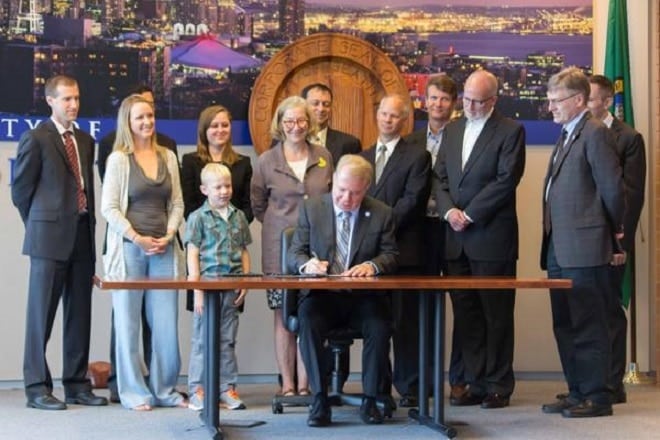 Despite pledges from pro-gun advocates to settle the matter in court, Seattle Mayor Ed Murray signed bills into law Friday that will tax firearms sales and require stolen guns to be reported.

The proposals, which passed unanimously through the City Council earlier this month, impose a “gun violence tax” on gun and ammo sales within city limits of up to $25 per firearm and require the reporting of lost or stolen guns within 24 hours under penalty of law.

Murray, a member of Michael Bloomberg’s Mayor’s Against Illegal Guns organization, signed the legislation alongside bill sponsors in a ceremony on Aug. 21.

“The unanimous Council vote on this ordinance demonstrates the commitment of this City and this community to lead on the ongoing national epidemic of gun violence,” Murray said in a previously released statement. “While action at the federal level and in many other jurisdictions remains gridlocked, we are moving ahead to address an issue so damaging to the young people of Seattle, especially young people of color.”

The first new ordinance, proposed as Council Bill 118437, sets a levy of $25 per firearm, 2.5 cents per .22 caliber cartridge, and 5 cents apiece for all other rounds of ammunition. The latter would add $2 to the average box of handgun ammunition and $12.50 to common 500 round packs of rimfire target ammo.

The second ordinance, CB 118436, requires any gun owner in the city limits to report a lost or stolen firearm to the Seattle Police within 24 hours. Those who fail to do so would be liable for a $500 fine or forfeiture.

Gun industry trade groups are unimpressed with the new laws.

“Imposing this tax is akin to taxing licensed pharmacies to combat a heroin epidemic,” wrote Lawrence Keane, senior vice president and general counsel of the National Shooting Sports Foundation, to Murray last week, urging the Mayor to refuse the bills.

Keane argued the tax is both illegal and ill conceived, citing that state preemption laws trump local controls on guns.

“Licensed firearms retailers located in Seattle will be harmed economically and be forced to either close their business or relocate outside the City to remain economically viable,” wrote Keane. “Even if the City had the legal authority to impose the tax, which it does not, it will not raise the funds its proponents imagine.”

Keane closed his letter by promising NSSF will file suit against the City of Seattle to enjoin enforcement of the unlawful ordinance.