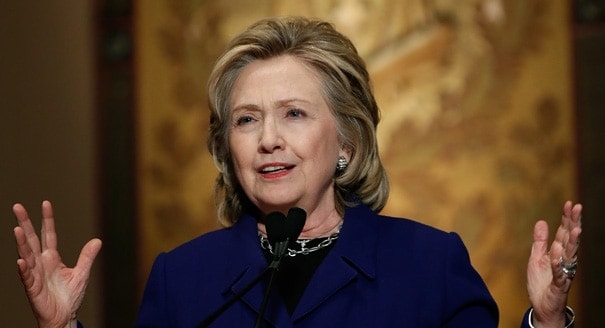 “With police, first and foremost, they need to be trained and held accountable and disciplined in a way that prevents the reaction that we’ve seen way too much of,” the former secretary of state wrote in a Facebook post. “And with civilians—a lot of these ‘stand your ground’ laws need to be rewritten. If you have to defend yourself, OK. But look at some of the instances we’ve had—Trayvon Martin, and too many more.”

Martin was fatally shot in Florida by neighborhood watch volunteer George Zimmerman, who the Justice Department earlier this year after an independent federal investigation found insufficient evidence to pursue legal action against.

The shooting raised questions about the state’s stand your ground law, which allows an armed citizen to use deadly force against an aggressor if they feel their life is in danger.

“Nobody should want to create circumstances in which innocent, unarmed people are killed—either by law enforcement or by civilians wielding guns. We’ve got to figure out how to deal with that,” Clinton wrote.

The comments came just days before the results of a poll were released Tuesday that claim much of her message as a presidential candidate is being drown out by growing national security concerns over Clinton’s use of a private e-mail server.

Voters are torn on whether they believe Clinton should suspend her campaign until all the legal questions about her use of the server are resolved.

According to the poll conducted by Rasmussen Reports, almost 46 percent of likely U.S. voters think the presidential hopeful should call it quits until the air clears, while 44 percent do not and 9 percent were undecided.

One-in-four Democrats, or 24 percent agree with Clinton putting her campaign on hold, compared to 73 percent of Republicans and 46 percent of voters not affiliated with either major party.

Only 37 percent of all voters said they trust Clinton and 63 percent think the candidate likely took some action as secretary of state as a result of donations to the Clinton Foundation.