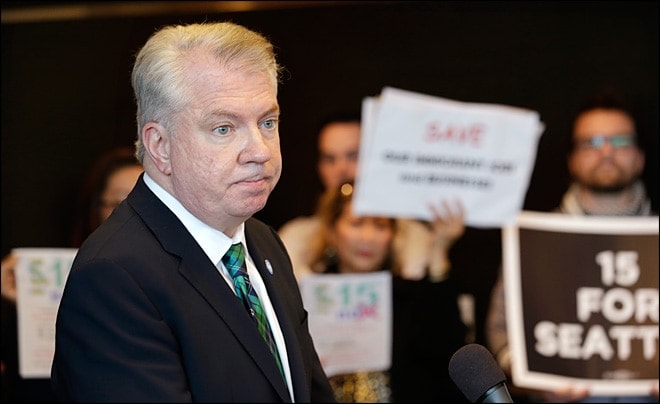 Seattle Mayor Ed Murray and other city officials have been named in a lawsuit by three of the nation’s most powerful gun rights organizations. (Photo: Elaine Thompson/AP)

The National Rifle Association, National Shooting Sports Foundation and Second Amendment Foundation have joined forces in an unprecedented effort to take the city of Seattle to court.

Just days after Seattle Mayor Ed Murray, himself a member of Michael Bloomberg’s Mayors Against Illegal Guns organization, signed a contentious measure to put a $25 tax on each firearm and up to five cents on each round of ammo sold in the city, the three gun rights groups pledged together to take it down.

In a rare joint statement issued Monday, the groups, which together represent more than five million gun owners and a lion’s share of the gun industry, contend the tax is an overstep which violates Washington’s preemption law, adopted in 1983, which places sole control over gun statutes under the state legislature.

As such, the gun rights advocates have filed a legal challenge in King County Superior Court – the first time all three groups have united on a lawsuit from its inception.

“Once again, anti-gun activists in Seattle have chosen to violate the Washington State Constitution and trample upon the Second Amendment rights of law-abiding citizens,” said Chris Cox, executive director of NRA’s Institute for Legislative Action. “It’s a shame to see such a waste of public resources on issues the courts have already ruled to be unconstitutional.”

For the gun industry, the tax is a broadside which trade leaders argue is aimed at ridding the city of legal gun dealers. Besides three groups, the suit was joined by a pair of Seattle’s city’s firearms retailers – Outdoor Emporium and Precise Shooter.

“The Seattle ordinance is nothing but a ‘poll tax’ on the Second Amendment and an effort to drive Seattle’s firearms retailers out of business,” said Lawrence G. Keane, NSSF senior vice president and general counsel.

Named as defendants in the civil suit are Murray in his official capacity as Mayor, the city’s Department of Finance and Administrative Services, and DFAS director Glen Lee.

While still in the legislative process, city lawmakers painted the tax as lawsuit-proof, citing that it was not a gun control law, which would earn it scrutiny under preemption, but rather a simple tax which cities and counties are allowed to levy.

“The city does not seem to understand that no matter how they wrap this package, it’s still a gun control law and it violates Washington’s long-standing preemption statute,” said SAF founder and Executive Vice President Alan Gottlieb.

For SAF, the suit with Seattle in King County Superior Court is a rematch of sorts that echoes a case filed six years ago challenging former Mayor Greg Nickels on a ban on guns in city parks. In February 2010, Judge Catherine Shaffer found the questionable ordinance violated Washington’s law and struck it down.

Now, faced with having to take on some of the fiercest litigators in the country, Seattle city officials point out that pro-gun groups have not always been victorious in high-profile lawsuits in the state.

“Plaintiffs continue to tout their success in defeating Seattle’s earlier executive order banning guns on playgrounds and in parks, but omitting their failure to invalidate I-594,” said Seattle City Attorney Pete Holmes. “These guys don’t always win, and I believe that both of these ordinances will survive legal challenge.”