Many offered condolences, some called for stricter gun laws, and gun company stocks jumped in price even amid a bear market following the deadly shooting of two journalists on live television.

Reporter Alison Parker, 24, and photographer Adam Ward, 27, were killed round 6:45 this morning while interviewing a source about a water park in Bridgewater Plaza, Virginia. Police say the shooter was a disgruntled employee.

The story developed throughout the morning and seemingly ended when the gunman crashed his car after a chase by police and turned his gun on himself. He later died in a hospital.

Many spoke out to offer their condolences on social media and tried to shine light on the victims.

When WDBJ7 General Manager, Jeff Marks, confirmed details of the death this morning on air, he released a brief statement about the loss before cutting to live coverage. 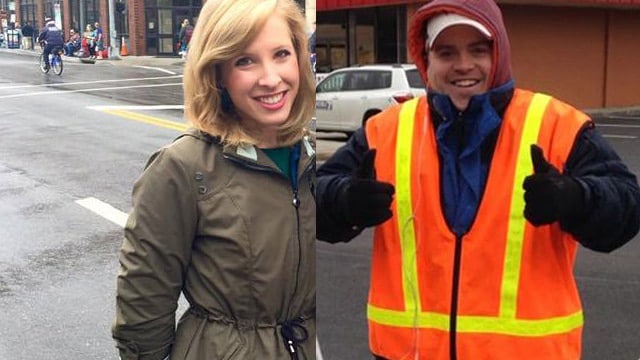 “I cannot tell you how much they were loved, Alison and Adam, by the WDBJ7 team. They both were in love — and we’ll talk about that a little more — with other members of the team,” Marks said. “And our hearts are broken and our sympathies go to the entire staff here, but also the parents and family of Adam Ward and Alison Parker who were just out doing their job today.”

Parker’s boyfriend, Chris Hurst, the night anchor for WDBJ, shared a message on social media about his loss.

“Alison Parker and I were very much in love. We just moved in together. I am numb. We were together almost nine months. It was the best nine months of our lives. We wanted to get married,” he wrote. “We just celebrated her 24th birthday. She was the most radiant woman I ever met. And for some reason she loved me back.”

“She worked with Adam every day. They were a team. I am heartbroken for his fiancee. She is our morning show producer. This is unconscionable,” he added.

Ward was engaged to a WDBJ Producer Melissa Ott who was producing the fateful interview as it aired on live TV.

Most major presidential candidates said little to nothing on the matter, except for a handful who offered condolences. But like clockwork many who have taken a definitive stance in the debate on gun control suggested remedies to prevent such tragedies in addition to condolences.

Virginia Gov. Terry McAuliffe first offered his sympathies to those involved before commenting on the matter.

“As we reflect with heavy hearts on this tragedy, it is appropriate to begin to ask questions about how we can prevent these senseless events in the future. Keeping guns out of the hands of people who would use them to harm our family, friends and loved ones is not a political issue; it is a matter of ensuring that more people can come home safely at the end of the day,” McAuliffe said. “We cannot rest until we have done whatever it takes to rid our society of preventable gun violence that results in tragedies like the one we are enduring today.”

Just across Virginia’s state line, in Washington, D.C., the first question of the day for White House Press Secretary Josh Earnest was about the shooting. Although details were scarce, Earnest offered the presidents overall view on gun violence.

“I did not have the opportunity to speak to the president about the tragic shooting that occurred earlier today in Virginia … The precise details of that incident continue to be under investigation but as you’ve heard me say in the past this is another example of gun violence that is becoming all too common in communities large and small all across the United States,” he said.

“While there is no piece of legislation that will end all violence in this country, there are some common sense things that only congress can do that we know would have a tangible impact in reducing gun violence in this country and congress could take those steps in a way that would not infringe on the Constitutional rights of law abiding Americans,” he told reporters. “The president has long advocated Congress taking those steps. And the president believes that they should continue to do so.”

On behalf of Everytown for Gun Safety, Colin Goddard, a Virginia Tech shooting survivor turned activist, expressed concern over the commonplace of violence in the U.S.

“It should not be normal in this country that people are shot and killed while doing their job, or studying in class, or watching a movie,” Goddard said. “Leaders in the Commonwealth and in our country can no longer sit idly by while more Americans are gunned down. It is time that they act to protect Americans and do more to keep guns out of dangerous hands. We deserve better.”

The Brady Campaign was more assertive in its statement on the incident.

“While there are still a lot of questions to be answered about this tragedy — the fact remains that 89 people die every day from gun violence – often at the hands of people who have no legal business owning firearms in the first place,” said Dan Gross, Brady’s president. “That’s why Brady is committed to doing everything we can to keep guns out of dangerous hands and off our streets by expanding Brady background checks to cover all gun sales and shutting down the small number of “bad apple” gun dealers that sell virtually every crime gun in our nation.”

Also following a post-massacre playbook, pro-gun groups have been quiet on the matter, but will likely issue criticism of their political opponents’ comments within the week. And conservative media outlets were quick to defend those same groups from attacks.

Similar to this list, some, like The Daily Caller, curated lists of social media posts by pundits and politicians to show a push for gun control and criticisms of pro-gun groups.

However, stock traders spoke loudly when the price for Smith & Wesson Holding Corporation and Sturm, Ruger & Company jumped during he onslaught of press coverage.

Smith & Wesson stock jumped 2.2 percent, or about 50 cents, per share throughout the day, and Ruger stock jumped 3.8 percent, or roughly $2, per share. Comparatively, the NASDAQ bounced around, dropping about 100 points but recovered in full about two hours later.