Still no clarification on open carry in Arkansas 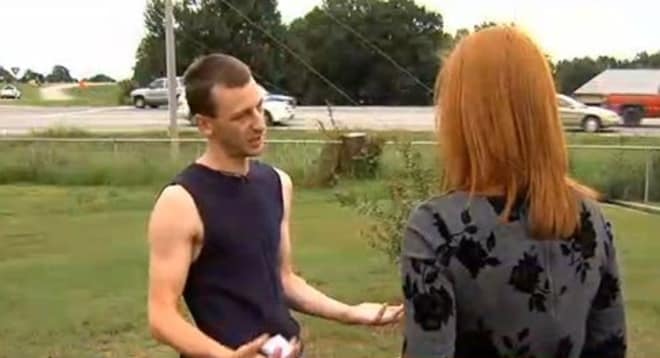 Richard Chambless said he will continue to carry openly, as he believes it’s legal to do so in the Natural State. (Photo: KATV)

For more than two years, controversy has surrounded Arkansas Act 746, which some interpret as Constitutional carry and others disagree.

Since its enactment and up until this point there have been no convictions against those choosing to carry openly without a license, but that all changed Tuesday when a judge found a Bald Knob resident guilty of illegally carrying a weapon at a McDonald’s restaurant in May.

Richard Chambless has appealed the decision, but in the meantime was sentenced to 15 days in jail, one year of probation and fined more than $2,000 for something which he and many other gun rights advocates say was perfectly legal.

According to reports from a local ABC affiliate, Chambless, who was openly carrying a holstered handgun on his hip, was arrested for disorderly conduct and illegally carrying a firearm, a Class A misdemeanor.

Chambless was not the first Arkansas resident to be stopped or even issued a citation while carrying openly. In fact, officers stopped Derrick Brown as he shopped at a Cabot Walmart last August. Brown also had a holstered handgun on his hip and although his firearm was initially confiscated by the officer, it was returned to Brown as the officer wrote the citation and sent him on his way. After more than a year and numerous court appearances, Brown’s case was dropped earlier this month.

But the judge didn’t budge with Chambless, who believes he did nothing wrong.

“As long as you don’t have unlawful intent, it is not a crime to carry a handgun in self defense, and that’s what I was doing,” Chambless said. “I was out shopping in town, stopped here to get a drink of water carrying my weapon and went to jail for it.”

During an almost 20-minute interview Chambless and Bald Knob Police Chief Erek Balentine exchanged their own interpretations of the law, but as each man stuck to his guns on what the law allows, tensions mounted before Balentine exploded on Chambless.

“Listen to me. Shut up and let me talk. What I want you to do is, bring your evidence and come to my prosecutor and judge and let them explain to you that you broke the law. Do you understand?” Balentine scoffed at Chambless before concluding, “You have the right to remain silent. Exercise it.”

In the end, there appears to be no more clarity on Act 746 then there was two years ago. In fact, at this time, the only official opinion on the Act came from former Attorney General Dustin McDaniel, who determined open carry with or without a license is not legal in the state. Current Attorney General Leslie Rutledge, who assumed office earlier this year, has repeatedly said she believes open carry in the state is legal, but has so far failed to release an official opinion on the matter, leaving many gun rights advocates perturbed to say the least.