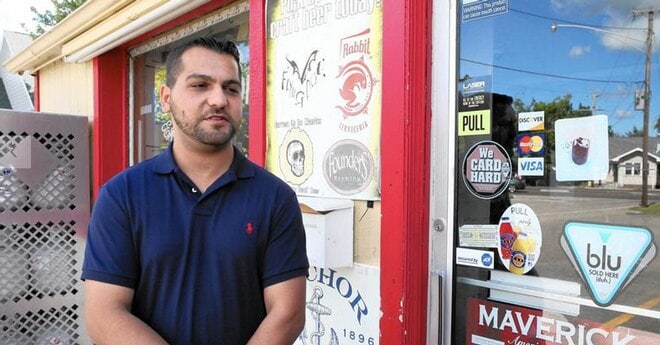 Authorities are working to determine the identity of a man who was shot and killed by an armed clerk while attempting to rob a convenience store in the Chicago suburb of Wauconda Sunday night.

The Chicago Tribune reported that the suspect, whose face was covered with a mask, entered the Kwick Shop just after 9 p.m armed with a handgun and proceeded to aim it at a customer and the clerk. The customer was able to run out of the store and call 911 while the suspect was focused on demanding cash from the clerk, 24-year-old Ahmad Samhan.

Samhan told the suspect he was grabbing money from behind the counter, but instead reached for a .40-caliber handgun and opened fire on the suspect, striking him at least twice in the chest. The suspect collapsed at the threshhold of the store and Samhan dialed 911 as well, telling the dispatcher, “We need an ambulance right now!” according to Lisa Marie Hewkin, who lives across the street and heard the gunshots and the frantic clerk afterwards.

Police arrived soon thereafter and the suspect was transported to a local hospital where he was pronounced dead less than an hour later.

So far, authorities have been unable to identify the suspect, who was not carrying identification of any kind. He was described as a white male, believed to be in his 20’s with a cross tattoo on his upper left arm, wrapped in a ribbon with the name “Ashley” above it and “Stud” toward the bottom. The suspect’s fingerprints did not turn up in the database, indicating he had no prior criminal history.

Wauconda Deputy Chief Tom Bender said at this time, it appears the clerk’s actions were justified and he acted in self-defense. Authorities confirmed Samhan has a valid FOID card and the gun used was legally registered. However, according to a report from a local ABC affiliate, the Lake County coroner said the suspect was armed with an air gun.

Samhan’s brother, Jawad, who opened the store for him Monday, told reporters his brother is distraught over the incident, but Jawad believes anyone else in his position would have done the same thing.

“He had a gun pointed at him,” Jawad said.

Jawad said his brother was “freaked out,” in shock, and crying most of the night, but he believes with the help of his friends and family he will be okay.

Jawad also added that he feels bad for the suspect’s family, who has suffered a loss.