Authorities hunting bikers who shot at cops on Washington highway 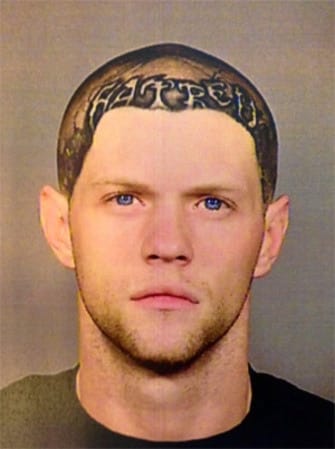 Kevin Vaughn, 26, is a 6-foot-1 white male who for some reason got “HATRED” tattooed across his forehead. (Photo: Tukwila Police)

Local and federal authorities in Washington state are searching for bikers who opened fire on officers serving a search warrant Thursday morning.

Tukwila police and the Bureau of Alcohol, Tobacco, Firearms and Explosives are searching for two bikers who opened fire on officers who were serving a search warrant at the house of Kevin M. Vaughn, who is wanted for auto theft.

The incident occurred when officers were securing the house and two men on motorcycles slowed on a road that overlooks the property, said Eric Drever, Tukwila’s police commander, in a press release.

The two bikers then fired at least seven shots at officers before fleeing the scene. No one was injured during the gunfire.

While the shooting is still being actively investigated, police found multiple firearms on the property.

It’s unclear if Vaughn was one of the bikers who opened fire on police, but police consider him a person of interest.

Vaughn is a 26-year-old white male with brown hair and blue eyes. He’s 6-foot-1 and the genius has “HATRED” tattooed across his forehead. Police said they have information showing that he is associated with the Resurrection Motorcycle Club.

Drever said one biker was wearing a grey hooded sweatshirt with a black IKON vest with a spinal pattern on the back. He word a green helmet and the bike was also green.

The second suspect was wearing a grey jacket, black helmet and had a silver Honda CBR.

Correction: Kevin Vaughn is not a member of the Resurrection Motorcycle Club.