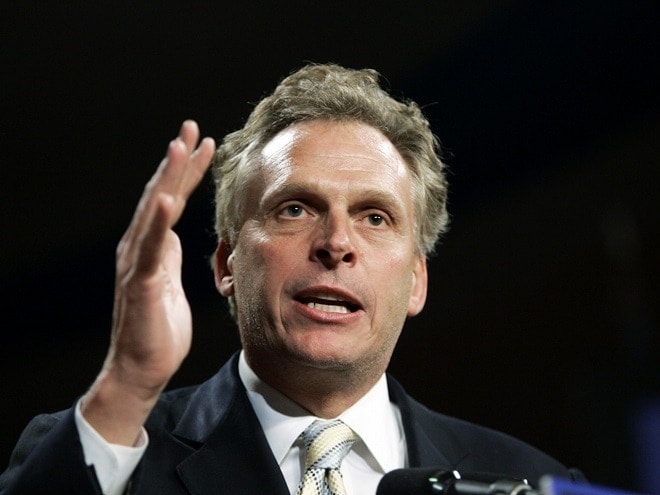 Virginia Gov. Terry McAuliffe and others are seeking expanded background checks after a tragic double homicide in the state done with a legally purchased gun. (Photo: Elise Amendola/AP)

Prominent Democrats at both federal and local levels are joining with gun control groups to seek more background checks after the shooting Wednesday of two journalists in Virginia.

Within hours of the graphic murder of WDBJ7 reporter Alison Parker, 24, and photographer Adam Ward, 27, by a disgruntled former co-worker who later claimed his own life, those advocating stronger gun laws took to the airwaves and social media seeking increased regulation of firearms.

The calls came from as high as the White House, where Press Secretary Josh Earnest put the ball for gun control in Congress’s court.

“While there is no piece of legislation that will end all violence there are some common sense things that only Congress can do that we know would have attainable impacts at reducing gun violence,” Earnest said.

“We have got to do something about gun violence in America. And I will take it on,” Clinton told a crowd in Iowa. She added, “It’s a very political, difficult issue in America, but I believe we are smart enough, we are compassionate enough to figure out how to balance legitimate Second Amendment rights with preventive measures and control measures.”

This came at the same time that Virginia Gov. Terry McAuliffe, who has consistently pushed on an gun control platform after winning his election with the support of money from Michael Bloomberg while canning legislation expanding gun rights, was espousing increased background checks in a news conference on the murders.

“This is why I’ve long advocated for background checks,” said McAuliffe in an interview with radio station WTOP. “I’m a gun owner, I’m a hunter, but you know what? I went through background checks myself in order to get it.”

However, McAuliffe later admitted he did not know how the shooter in Wednesday’s attack obtained his gun, had any information on his criminal background, or whether he was a prohibited firearms possessor.

In the gunman’s 23-page manifesto of reasons for his rampage, where he admits he was a “human powder keg,” Flanagan also states, “I put down a deposit for a gun on 6/19/15,” pointing to a legal gun purchase.

The Bureau of Alcohol, Tobacco, Firearms, and Explosives confirmed late Wednesday that the firearm used by Flanagan was in fact bought legally weeks before the attack and has been recovered, ABC News reported.

Andy Parker, father of slain journalist Alison Parker, told Fox News he spoke with McAuliffe, telling the governor he was ready to, “shame legislators into doing something about closing loopholes in background checks and making sure crazy people don’t get guns.”

Parker’s call on McAuliffe was joined by a state lawmaker, Delegate Patrick Hope, D-Arlington, who started an online petition calling on both the governor and other members of the state legislature to pass an expanded background check law that includes most private transfers. The petition garnered 15,000 signatures in its first 15 hours.

As for gun control groups, the Brady Campaign to Prevent Gun Violence, who have long-sought to have Brady checks done for all firearms sales commercial and private, mentioned background check expansion in the second sentence of their statement on the shooting.

In comparison, other national gun control groups to include Everytown for Gun Safety, and Gabby Gifford’s Americans for Responsible Solutions condemned the attacks but came short of calling for specific action on background checks.

One Republican presidential candidate with ties to Virginia, Carly Fiorina, expressed disappointment at the rush by some to use the tragedy for political ends, citing the focus should instead be placed on stepping up mental health care.

“You know I’m so disappointed, every time one of these tragedies occurs, they politicize it for an agenda around gun control,” Fiorina told KTIV. “What I would hope is that these tragedies, after an appropriate period of mourning, would be a period of introspection…How should we invest in detecting mental health issues like this person had.”